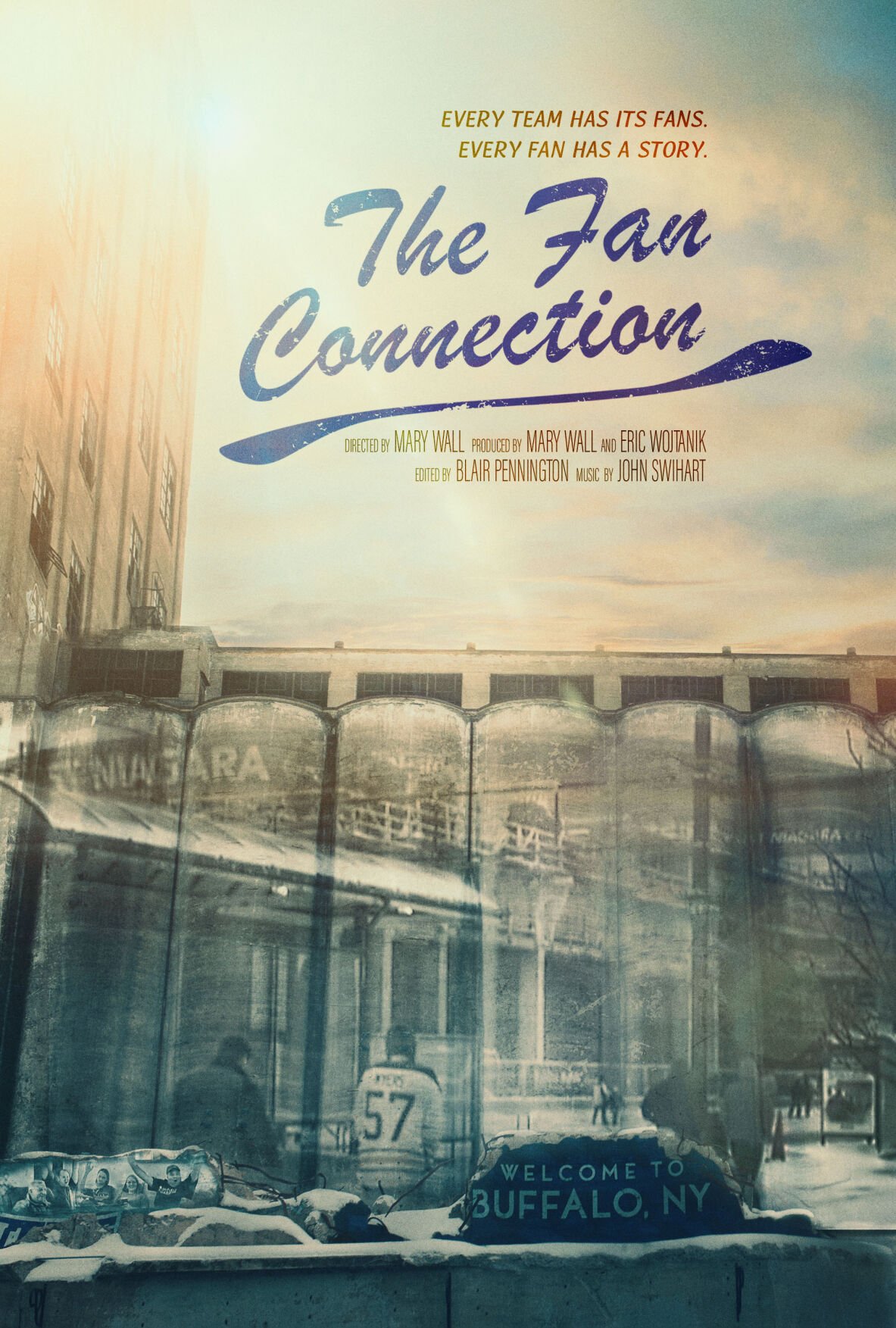 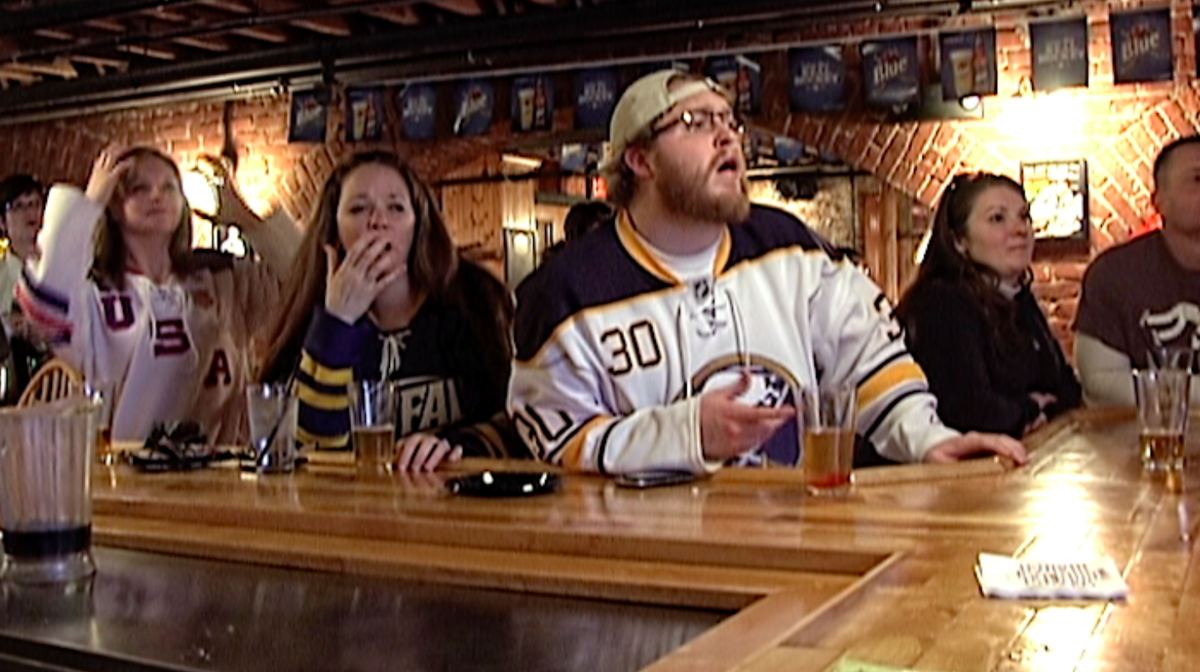 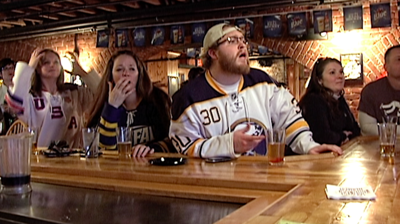 The Fan Connection is an intimate documentary exploring the special relationship that exists between the Buffalo Sabres and the team’s long-suffering — but ever-enthusiastic — fanbase. The 2019 Buffalo International Film Festival entry makes its virtual premiere from February 12-25 through the Fredonia Opera House, giving more Western New Yorkers the chance to experience the film, and maybe even spot themselves. (Visit www.fanconnectionmovie.com/see-the-film for the link to buy streaming tickets.)

In advance of its virtual screenings, director Mary Wall and producer Eric Wojtanik recently discussed the film’s ambitious concept, its unique production, and the tricky process of getting it before audiences.

How did the idea for the film come together?

The idea for this movie took shape over five years. In 2006, I was on a two-month hiatus from my job on The Office and was between living situations. So I spent the entirety of those two months with my family in Hamburg. It happened to coincide with the incredible Sabres playoff run, ending in a loss to Carolina in the Eastern Conference finals. Throughout the run, I was taken by the sense of community it brought to Buffalo and Western New York. Strangers seemed to be long time friends. Then, after the loss to Carolina, I remember seeing fans at the airport welcoming the team home and thanking them for the run. These were fans who had just been devastated by the loss and still found it in themselves to express gratitude to the players. That struck me as special, and I wanted to explore that idea.

In 2011, I was back for a three-day weekend for Easter.  The Pegulas had recently purchased the team and they came from the bottom of the league to make the playoffs. Everywhere I went, it seemed everyone was talking about winning the Cup in the next three years. It almost seemed like a given at that time.  I felt an incredible sense of urgency. This was a story about loyalty in the face of near-constant disappointment. It wouldn’t be the same if the Sabres had won a championship; it’s easy to cheer for a winner.

This was a story about a city told through the fans of its hockey team. A documentary seemed like the right medium. The fans would be the key. It’s hard to get an audience to care about a city or a team, but an audience will empathize with and care about people, and then, in turn, care about the things those people care about.

Where did you find your interview subjects, and what was their response to the finished film?

For lack of a better word, we held casting sessions in August 2011. We met with roughly 170 people over five days. I read over the notes from all my family and friends who helped me with interviews, and narrowed it down to about 30 to 40. I met with all of them personally, and then picked the 13 I would end up following for the next four years. While everyone ended up in the movie in some way, it was through several years of editing that we narrowed it down to the three stories in the final cut.

Everyone’s response to the film was very positive. I know there was some small disappointment from some of the people who gave four years of their lives to me to be minimally represented, but they were all moved by the stories in the final cut and felt it represented them, Buffalo, and Sabres fans well.

It seems like a happy coincidence that you were filming when the Sabres were in the 2012 playoff push. Did the fact that they missed the playoffs make for a better ending?

It’s hard to say if it is a better or worse ending. If the Sabres had made the playoffs, we still don’t know how the movie would have ended. Would they lose in the first round? Make a 2006 style push? Win the Cup? It’s hard to say.

What I like about the ending we have in the movie is the sense of possibility it provides. Even though a large part of the city’s and the individuals’ identities are centered around the Sabres, both the city and the individuals are able to experience their own growth even when the team loses. There’s something I really like about the realization that the power to make a better community or to better your own life lies within you. Buffalo had such a long history of looking towards outsiders and big money, but there is something special about realizing our own worth and that of our neighbors and the people who have always been here, to paraphrase one of the people in the movie.

Some time has passed since this was shot, which lends a nice air of nostalgia. Did you keep up with your interviewees during the years that followed?

Yes, we keep up with the people in this movie. Even though it ends in 2012, we were filming through early 2015.  For four years these people and their families welcomed me into their lives.  For that I will always be grateful, but I will also always be connected.

What has the process of getting the film seen been like?

Like every other aspect of independent filmmaking, distribution has been challenging. We spent close to a year mapping out a plan, which was largely built around booking live, in person screenings with independent theatres. Things began on track, but by mid-March 2020, everything changed because of COVID-19. It took time, but towards the end of the year we pivoted to a new plan centered around virtual events and educational screenings for universities. We’re really excited about the virtual premiere we’re hosting with 1891 Fredonia Opera House. We’re also in the process of finalizing a similar screening engagement with Niagara Artists Centre in St. Catharines, Ontario, which will be our Canadian premiere.

There are actually a lot of parallels between the process of trying to get the movie seen, and the process of Buffalo undergoing its recent renaissance, primarily that there are no silver-bullet solutions. A major distributor is not going to swoop in and acquire The Fan Connection, much like Bass Pro and big box development wasn’t the solution for improving Buffalo. In both cases the only way to achieve real tangible success is through the hard work and dedication of those most invested. Also in both cases, there’s a lot of work left to do.

What are you working on next?

In terms of what’s next outside of distribution, we have to finish The Fan Connection bonus features DVD, as that is our final Kickstarter reward to backers. And as part of that, we’re trying to shape a story that utilizes some of the unused footage shot during the making of the film to examine Buffalo’s history and current situation through the lens of racial and social equity in urban development. While doing that, we both continue to pursue opportunities along our respective career paths — for me, writing, and for Mary, directing.

Learn more about the film at fanconnectionmovie.com.

Natural Wine with a capital N

Social media is a cancer on society. What began as a Randian conque…