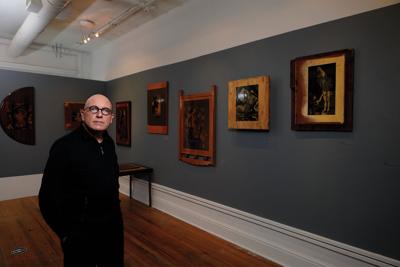 When Lawrence Brose, director of CEPA Gallery, recently announced his “retirement,” he only meant that he was leaving the nationally renowned institution that he’s guided through untold crises onto solid fiscal and artistic ground. Brose will exit CEPA at the end of this year and continue his work as a film-centered artist.

Before joining the photography and media-based center, Brose owned Piano Restorations, a company dedicated to high-quality restoration of vintage instruments. The Steinway Art Case grand piano in the main rotunda of the Buffalo History Museum was originally designed for that building when it served as the New York State Pavilion in the 1901 Pan-American Exposition. Piano Restorations refurbished the piano, which remains in operating condition, in 1987.

As an artist, Brose has made over thirty experimental films. He worked with renowned composers, including John Cage, Virgil Thomson, Douglas Cohen, and Frederic Rzewski—largely as a result of his friendship with the virtuoso pianist and composer Yvar Mikhashoff. A recently restored AIDS film by the artist was included in Art AIDS America, an exhibition curated by Jonathan David Katz.

In 2008, the FBI and US Immigration and Customs Enforcement (ICE) seized Brose’s computer, which had been kept in the loft space where CEPA housed visiting artists, alleging it contained images of child pornography. Brose was arrested. “I denied the charges then,” he says, “and will continue to deny them until my last breath.” At the time, he and the CEPA board mutually agreed it would be best if he stepped away from the organization to focus on his defense. Many in the local and national art communities offered Brose emotional and financial support.

Subsequent forensic analysis revealed that the computer, to which others had access, was virus infected and had been hacked. Perhaps realizing their case was a loser, the US Attorney offered a rare plea bargain, reducing the allegations to a token charge of obscenity. This was not the first, nor likely the last, time that members of the local art community have been traumatized by dubious government charges. Brose lived under the strain of the charges for six years. With his financial and emotional resources exhausted, he accepted the plea.

That ordeal behind him, the artist/administrator was ready to resume his career. In 2016, CEPA entered a challenging economic period, and it was widely rumored that the forty-two-year-old institution was teetering fiscally. The CEPA board reached out to Brose, who returned as executive director. “I worked closely with the board and we got the organization back on track and in a strong and healthy position,” he says. “I’m proud of what we were able to accomplish over the past four years.” Not only is CEPA now in good financial shape, it has managed to remain relevant during the current pandemic, with such undertakings as Stacey Robinson’s Black Matters Billboard Project and the  Photography Works Bus Shelter Show. “We decided, if people can’t come to the gallery, we will go out to the public,” explains Brose.

“My plan is to spend a bit of time decompressing,” says Brose, concerning his future. He’ll continue his Legacy Project, raising funds to restore and digitize at least six more of his films. He also wants to archive his correspondence with composers and filmmakers and articles related to his work. Then he’ll do what artists do: make more art.

Brose calls the local art scene “incredible, compared to similar areas.” He would, however, like to see more queer art, such as the groundbreaking exhibition he curated, Deviant Bodies 2.0 (2006), which was the first exhibition by transgender artists in a professional gallery. He’d also like to see the creation of an organization “to give voice and presence in our community and the important work being done.”

In a joint statement to Spree, former CEPA directors Robert Hirsch and Gail Nicholson express appreciation for Brose: “Lawrence has dedicated his professional life to making, presenting, and educating audiences about unique and inspiring projects by artists working in photography and the visual arts.  His dedication to this work has strengthened CEPA’s position as a nationally recognized contemporary arts center worthy of its many honors.”