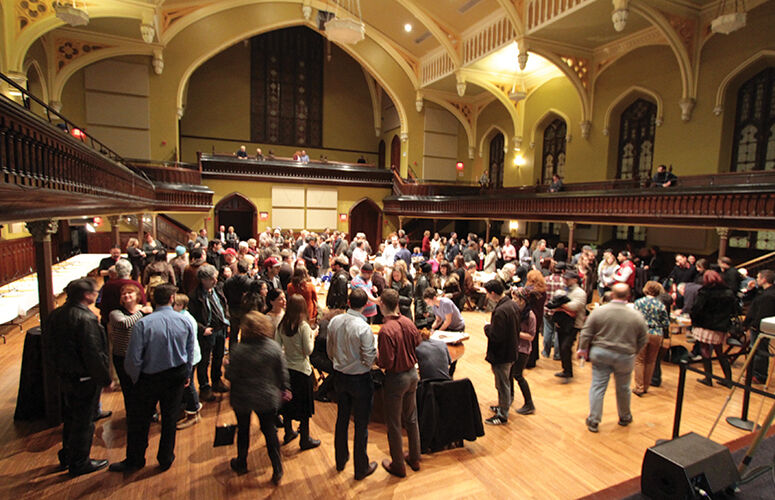 Drawing rallies takes place twice a year in Babeville's Asbury Hall. The next event is Wednesday, February 22, at 7 p.m. 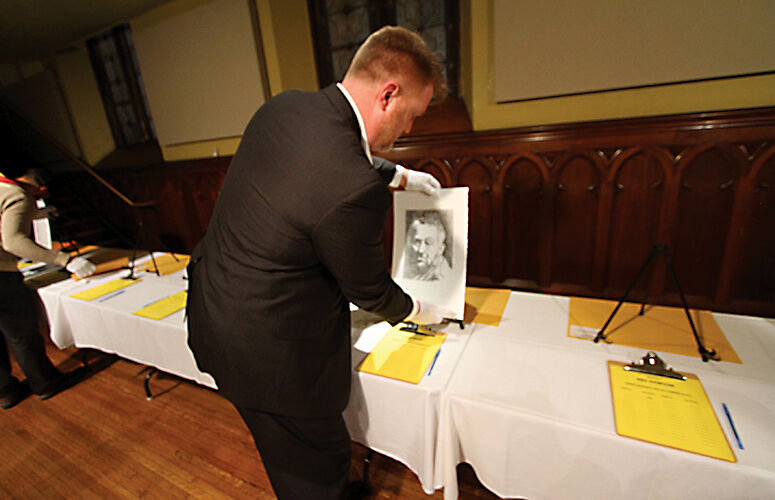 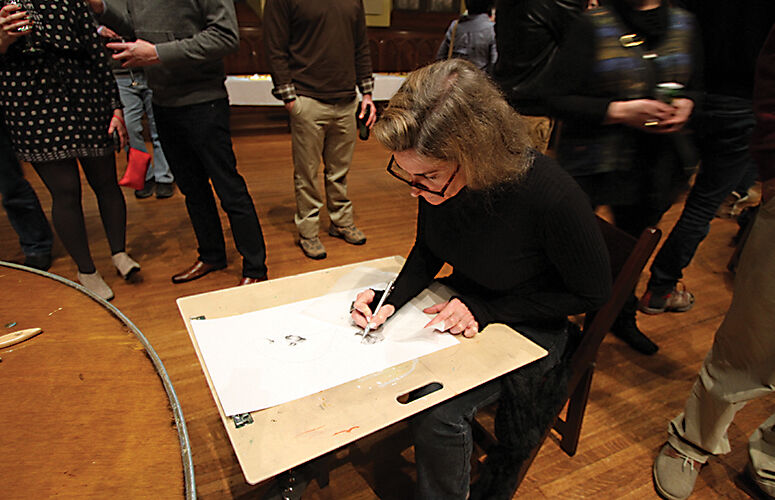 Thirty-six artists, two sessions of forty-five minutes, opening bid: thirty-nine dollars. That pretty much sums up the essential elements of Hallwalls’ semiannual drawing rally known as A Mid Winter's [or Summer] Draw. Since its inception, it has perhaps become Buffalo’s most anticipated fundraiser. "Even after five years [ten rallies]," says Hallwalls curator John Massier, "people still come up to me and tell me it is their favorite art event, ever." To the public, for a five dollar admission, it’s an opportunity to mingle and watch a rootin’ tootin’ quick-draw derby where the bullseye is creative art. And maybe to take home an artwork for a great price, with a story to go with it.

For the drawing participants, it’s something else altogether. "The artists are all invited based on my awareness of their work," says Massier, who notes that, "there is a range of artistic styles and career stages represented, from graduate students to professors, early career, to veterans. Over time, certainly, the hardest thing is choosing from among an ever-increasing pool of participants, but there is no shortage of people eager to participate. That’s a good problem to have, and it reflects well upon the artists in town."

While some artists return often (Kyle Butler, Cailin Cass, Joel Brenden, Fotini Galanes, to name a few), around thirty percent are new each rally. And not everyone who is invited agrees to participate. Some are uncomfortable drawing in public; others work too slowly for the forty-five-minute time limit. For those who consent, it presents an opportunity, a challenge, and a rush. Artists get to support an important contemporary art center, and all they put on the line is forty-five minutes of time—and their egos.

The details are simple enough: thirty-six artists draw live in Asbury Hall in one of two successive sessions. Six circular drawing tables are spread out evenly so the public can mill around and watch participants up close. Everyone gets the same twelve-by-eighteen inch paper. There are no theme or media requirements; the only rule is that the work dry quickly. That’s because following each round, the artworks go on silent auction for thirty minutes. Bids start at $39 with some going for that price, and some going as high as $500. Most fall in the $100 to $200 range. Not everyone bids of course. "We’ve noticed that a lot of the audience just comes to drink and watch and hang out," Massier points out.

The view from the drawing table

"We want people to understand that most of the artists are used to making work in the studio," says Hallwalls board member Emily Tucker. "This is a way for them to show off their technique and skill, but it is timed, so there is an added, almost game show element to it. That’s part of the reason it’s so fun."

As a longtime Hallwalls supporter, I was a drawing artist in the very first rally. Since then, I have participated in all but a few, once even as a last-minute substitute. If you’re wondering what it’s like making art under the gun in a "game show" atmosphere while people watch, I would describe the experience as both exhilarating and nerve-wracking. "Most artists, including those who are the most accomplished, enter with a plan," says Massier. "Some practice beforehand, either to get their efforts within a forty-five minute time limit, or to practice a specific drawing. It’s rare for someone to come in and just extemporaneously draw; some who have tried have run up against the clock and failed to adequately finish their pieces."

For my first rally, I planned. Hallwalls is known for smart contemporary art and, of course, I wanted to do something suitably hip. Not overly pretentious, but something someone would look at, nod approvingly with an elevated eyebrow, and say "cool." For a few weeks in advance, there was a back-of-the-mind low-grade anxiety about what I would draw. I came up with something appropriately ironic, irony being a staple of contemporary art. It was based on a vintage four-step John Nagy illustration of "how to draw a cowboy." How to draw…at a drawing rally…get it? I would make it dense and layered, with lots of evidence of the "artist’s hand," subverting the cartoon-like intended outcome. And I practiced ahead of time to try out the combination of wet and dry media, which I had never used before.

Planning is all well and good, but there comes that moment when, like a matador entering the ring, you must step into the drawing arena and face the raging white paper. And you better be at your table at the designated time. "More than a few people have told me that they love the tight time schedule," says Massier, "because it makes the drawing rally the only Buffalo event to start exactly on time. I don’t wait for artists to show up; if you’re drawing in the first round, clock starts at 7:15."

I usually try to get a couple of whatever special cocktails they’re serving under my belt by starting time. Helps me, you know, ignore the bull in the ring. Every artist has his own level of engagement with the audience. Some plug in ear buds and enter their own private Idahos. Others turn it into a bit of a performance. Kyle Butler twice brought his own overstuffed chair to relax in as he drew. Jeff Sherven wore a hazmat suit. Another mystery artist donned a hooded mask. Alicia Paolucci always arrives wearing a different, charmingly eccentric costume.

I may be the only artist who stands to do my work. I like the arm freedom. And as the DJ plays music, I get into the groove. While some people draw with great care and precision, I prefer some degree of expressionistic abandon. As a result, I am usually a mess afterward, and head directly to the bathroom to wash up. It’s at this point that I become aware of the post-rally adrenalin buzz. That may be why most artists who do the rally once offer to do it again; if you are not invited next time, it’s hard to know whether to feel disappointed or relieved.

Watching the auction is another thing entirely. Thirty minutes seems painfully long—and not long enough. This is where you discover whether your efforts have been a success in the eyes of the bidders. There are a few very collectible participating artists who do what they are known for and can count on very competitive bidding. Others swing for the fence and see what happens.

"It’s an opportunity to acquire work at a very reasonable price while supporting an extremely important and storied local institution," says Tucker. "It’s the perfect event for all collectors from first timers to seasoned."

Massier considers it to be a model nonprofit fundraiser, "where the payback exceeds the resources and time used to organize it, and its freshness is maintained by the specific artists participating." He advises people who have never attended not to be misled by the brief amount of time artists have to work. "All participating artists come to ‘represent,’" he says, "and typically make astounding works."