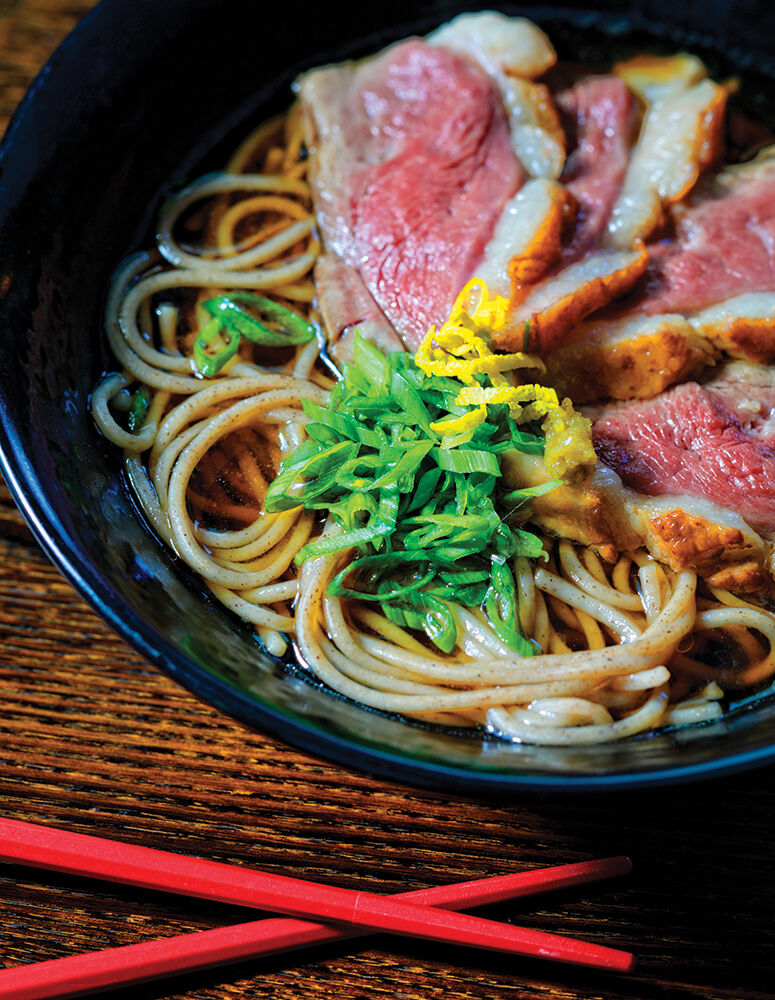 Soba is the Japanese word for buckwheat, but also serves as the common term for Japan’s buckwheat noodles. Similar in size and shape to spaghetti and used in both cold and hot preparations, buckwheat noodles can be cooked fresh or dried and prepared at a future date— much like Italy’s pasta.

Soba originates in China, but makes its way to Japan before 300 BCE. During the Edo period, which runs from the early 1600s to about 1868, soba stands that serve hot and cold soba dishes, sake, and, in rougher neighborhoods, udon, begin to pop up in Japan’s more populated cities. Delicious but also nutritious, soba bolsters the diets of the era’s wealthy with an adequate amount of B1 (thiamine), a vitamin missing from the food staple of the privileged: white rice.

Buckwheat, which incidentally isn’t made of wheat at all, is an equally healthy addition to a modern diet. It contains all eight of the essential amino acids, which are missing from standard wheat flour.

Soba noodles are considered the traditional noodle of Tokyo, and dishes featuring them are popular in both Japan and here in the United States. Western New Yorkers can find dried soba in area supermarkets, but the only local place we know of to get fresh and housemade soba is Sato.

Joshua Smith, who owns and operates all three of the restaurants in the Sato group with his wife, chef Satomi Smith, tells us they work with a buckwheat mill in Penn Yan. "Knowing that the Finger Lakes and Western New York are basically the buckwheat capital of the United States, with many farmers exporting to Japan, we are able to offer a top-quality product for a very competitive price," he says. "They mill three different sizes of buckwheat grains especially for us."

"We make what they call Ni-Hachi soba, which is eighty percent buckwheat and twenty percent wheat. We mix the flour together by hand and knead it until it has solidified fairly well. Then we use a wooden rolling stick to thin it down into a rectangle. Continuously adding flour to it so it doesn’t stick, we fold it over. After we get it to a point where it’s folded over and the total noodle length is about a foot and a half, we cut it. In Satomi’s hometown of Fukui, they are famous for a slightly thicker soba noodle—as opposed to Tokyo which like ultra-thin noodles—so here at Sato, we cut it thicker with the Soba-giri Bocho, a large soba knife."

In winter, as a nod to the dish being traditionally served at the end of the year, Sato offers its Elmwood Avenue guests Kamo Nanban, which showcases housemade soba noodles served with tender slices of duck breast, scallions, and shiitake mushrooms in a hot dashi of soy and duck fat broth with spicy yuzu kosho on the side.

The story of how the Sato team learned how to make soba and ramen noodles is one of frustration. Upon opening their doors in  2014, the new restaurant promptly sold out of ramen and had to wait for a shipment of noodles to arrive from New York before they could put the then-obscure dish back on the menu. The public was up in arms, which may seem a little ridiculous, but, remember, WNY had been a ramen desert.

"Even though [the imported noodles] were from a famous Japanese noodle company, in addition to struggling with supply, we weren’t entirely satisfied with the product either," says Smith. "We also quickly realized how much freezer and refrigerator space we were going to need to store the noodles and keep up with demand. So, we went to study ramen noodle making with chef Shuichi Kotani in NYC and developed our own noodle. Later, we both went back to Japan and studied soba noodlemaking in the Fukui tradition, as well as continued the process of refining our skills with chef Kotani. With the volume of noodles we go through, we never have to freeze noodles."

Since Sato’s great noodle shortage, Smith estimates he and Satomi have returned to Japan three times to study, augmented with three trips a year to work with chef Kotani in New York. Also of note, chef Kotani uses buckwheat flour grown in the Finger Lakes, which he then ships to Japan for milling before it’s shipped back from Japan for his use in New York.

Besides ramen, soba, and udon, Sato has also developed a new Hakata-style egg noodle that’s thinner and intended for the chicken broth ramen at the recently opened Sato Brewpub. "Over the course of a week, we probably spend about three full days a week making noodles," Smith comments, "but fresh makes all the difference."