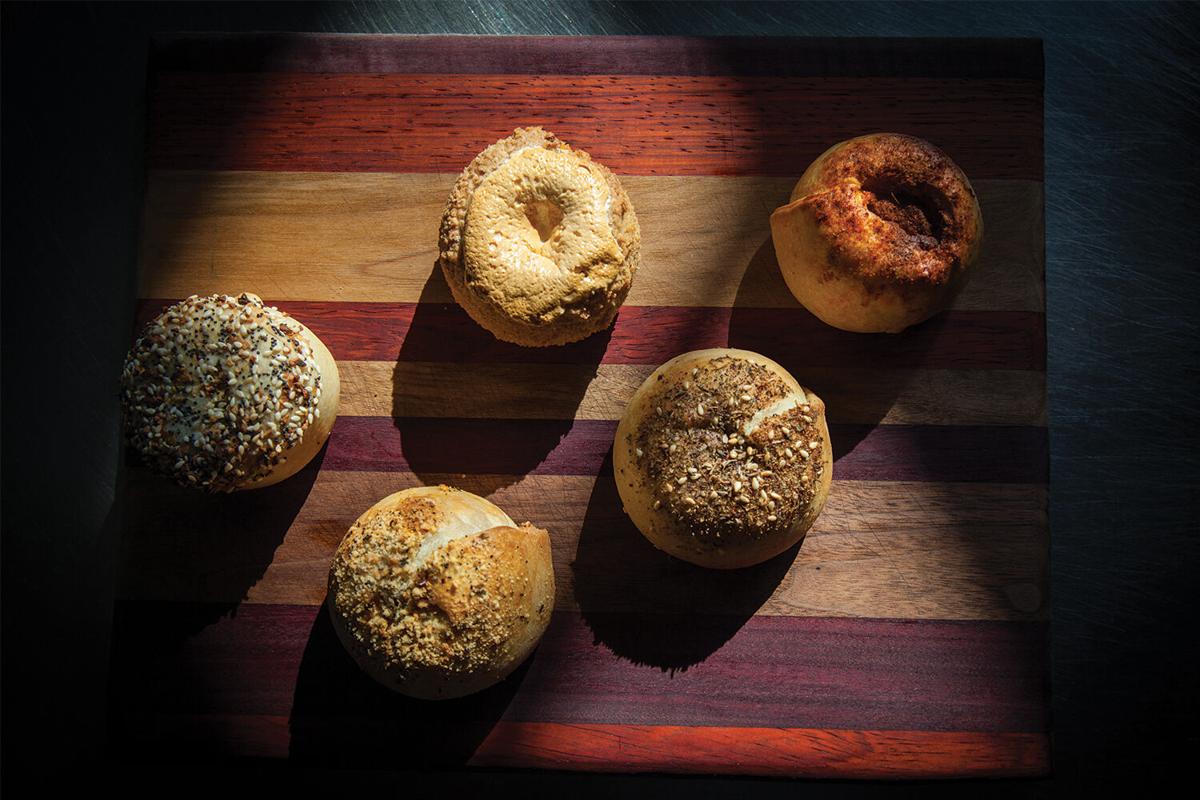 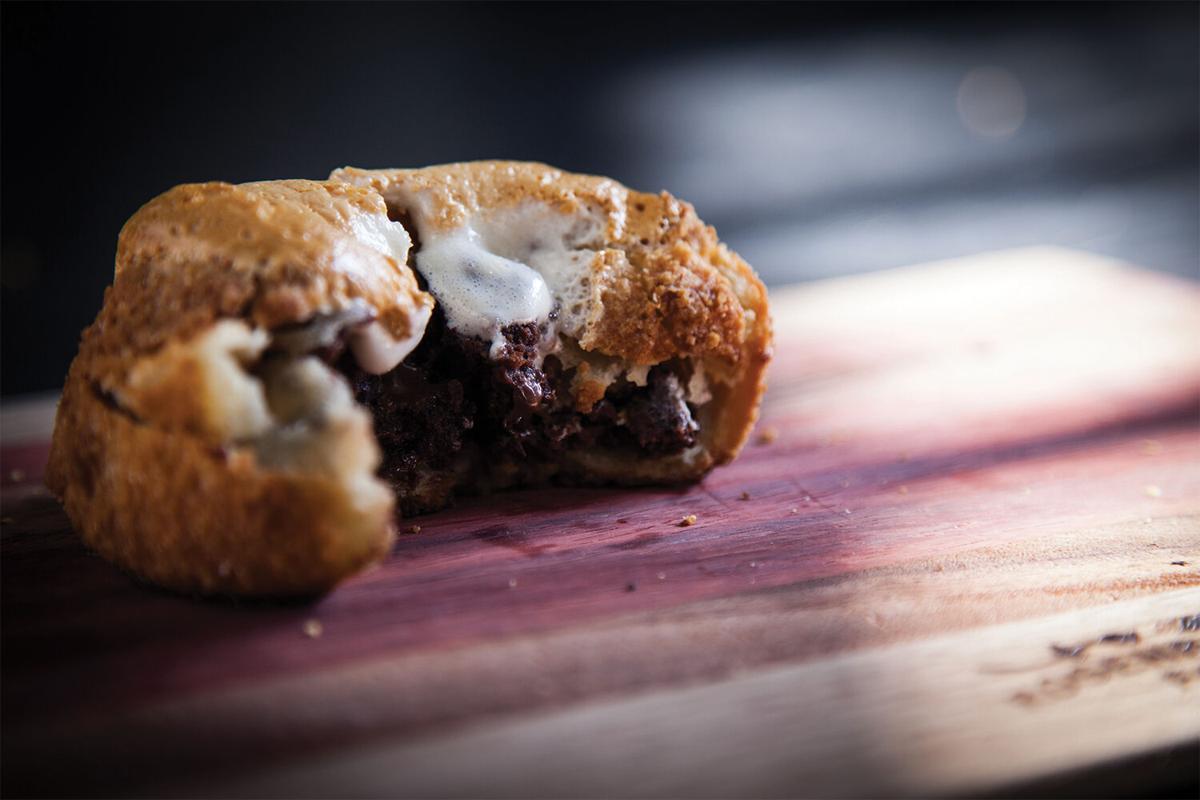 The s’mores knish is filled with toasted marshmallow and brownie batter. 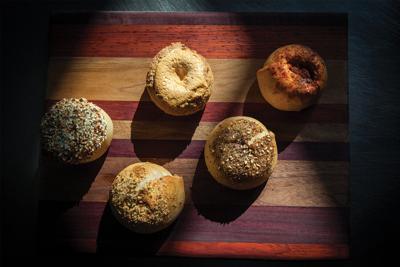 Entering the food scene with an unfamiliar product can be challenging, but the reward can be immediate credibility. The Bloom & Rose has become Western New York’s face of knish since 2018, when the owners feared the Jewish favorite may become extinct. It now offers an array of knish flavors termed “vaguely traditional; weirdly delicious.”

What’s a knish? It’s a savory pastry filled with anything from potatoes to cheese to fruit and then baked or fried. Imagine a British hand pie or fill-in-the-blank stuffed dough from nearly any culture. Each week, the B&R team plans its production schedule and makes its dough in small batches. Every batch is rolled thin, by hand. Filling is laid onto the dough and then the long sheet is rolled around the filling a few times. Each knish is hand cut, formed, and topped with a unique spice mixture. Finally, the knishes are par-baked to ensure easy baking at home.

The Bloom & Rose was founded by  Zach Rosenbloom, Josh Lankford, and Lois Rosenbloom. Zach, executive sous chef at Park Country Club, is married to Lois, a data scientist with deep roots in the WNY Jewish community. Lankford has spent his career in food marketing, working for two of the largest Buffalo-based food manufacturers. The three were curious how Buffalo would treat this concept, and felt knishes offered them the simplicity and versatility to find out.

“We were inspired by Jewish deli fare as an underappreciated and underutilized cuisine,” says Zach Rosenbloom. “As professional chefs and food enthusiasts, we felt it was time to reinvent the knish and offer it a new lease on life.”

The only culinarian of the three, Zach quickly became overwhelmed with demand, and recruited close friends and coworkers at Park Country Club, Andy DiPirro and Joseph “JB” Pagels. As the business grew, so did DiPirro and Pagels’ interest in becoming owners, and they became a team of five. DiPirro, who has also led a career in the industry working at Park Country Club and several Buffalo restaurants, is the lone full-time worker for the Bloom & Rose, dedicating countless hours toward managing the kitchen, developing recipes, making knishes, and creating social campaigns.

Seasonality, tradition, and personal taste drive the menu. The team has years of experience with local and global flavors and works together to devise interesting combinations. The spinach and feta knish ($4) features a timeless duo in the center, complemented by the Mediterranean spice mix za’atar, which nails it for me. (With ingredients that vary slightly by region, za’atar is a complex blend: earthy, savory, nutty, and tangy, it features sesame seeds, thyme, oregano, marjoram, sumac, and cumin.) The stuffed banana pepper knish ($5) is delightfully spicy and creamy, filled with ricotta, mozzarella, and Pecorino Romano cheeses. The smoked onion and farmer’s cheese knish ($5) is unexpectedly deep, with extra warmth from paprika. The traditional knish ($4), featuring potato and onion, is topped with everything bagel spice and is a crowd pleaser. The traditional and spinach and feta knishes are so popular, they are constants on the menu and have inspired separate everything bagel and za’atar spice blends ($5).

For dessert, the s’mores knish ($5) tastes like a combination of s’mores and warm brownies, thanks to toasted marshmallow brownie batter interior and graham cracker and marshmallow dusted exterior. My wide-eyed children snatched the chocolate-filled halves and gobbled theirs in seconds.

“Our first creation was a play on a Buffalo classic by creating a knish with a topping akin to the classic kümmelweck spice on the famous beef on ’weck,” says Rosenbloom. “We then sought flavors from our region’s seasonal ingredients. Since we sell primarily at farmers’ markets, it was easy to find inspiration from local vendors.”

As small-business owners, the team understands the importance of supporting area farmers and producers, and sourcing local is a priority. “Selfishly, we also benefit from this,” Rosenbloom says, as local ingredients are typically high quality and fresh, which make the best knishes. B&R has forged relationships with local vendors, including Fleckenstein Farms, LynOaken Farms, and Flat #12 Mushrooms.

Prior to the pandemic, the team spun off as Ghost Deli, providing Jewish-style deli favorites for pickup and delivery. The sudden changes in March nearly sank that business and required a renewed focus on knishes. The team also invested energy into testing and improving online sales options. Always accessible through their website, the Bloom & Rose aims to ship nationwide, as well as offer regular availability through Chandler Street Market.

The owners want to find another opportunity to revive the deli, and continue to explore how to make it happen. They also plan to expand offerings to additional local markets, grocery stores, and restaurants.

“As the self-proclaimed ‘Khans of Knish,’ we plan on growing our small empire with kindness and deliciousness,” says Rosenbloom.

These are not your grandmother’s knishes

Zach: Samosa. The flavors remind me of two of our close friends, Vivek and Shruti, who live in India. The filling actually came about from cooking together with the two of them and learning some tricks.

Lois: Smoked onion and farmer’s cheese. It has such a great flavor reminiscent of bacon. Early in our venture, we were actually accused of putting bacon in our knishes, which of course we didn’t. We still joke about how we got the flavor so good someone was angry at us.

JB: Mushroom and peach, for the sole reason that I was convinced it would be gross, but when Zach made it, the surprising synergy that was achieved with seemingly oddball flavors just blew my mind.

Andy: S’mores, because it brings me back to camping trips with my family and friends.