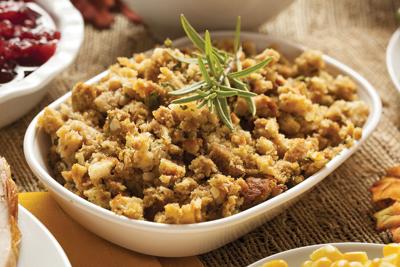 I’m fortunate my grandmother, who just celebrated her eighty-eighth birthday, is still around and agreed to share her recipe with Forever Young readers. It’s something she remembers her mother making every Thanksgiving at their flat on Herkimer Street in Buffalo since before my grandmother was a teenager, which puts its genesis as a family tradition at around the 1940s. Later, my grandparents would host Thanksgiving for their own growing family on Auburn Avenue in Buffalo, where this recipe became a staple as well.

Although there are many ways to make stuffing (or dressing, if it’s baked alongside the turkey and not in it) and ingredients to add, this one is a little different: it calls for sausage, which helps keep it moist and flavorful, and the savory variety compliments the turkey flavor perfectly. Another secret weapon is Bell’s Seasoning, which features rosemary, oregano, sage, ginger, and marjoram.

After hosting Thanksgiving for more than fifty years, Grandma gracefully passed the drumstick to my mother and me a few years ago. I hope you enjoy this dish as much as we have.

2 packages of stuffing bread, found in the bakery section of most supermarkets

Take bread out of packages and spread out on a baking sheet. Allow to dry out on counter overnight.

Add the broth or boullion 1 cup at a time and hand mix until liquid is absorbed and stuffing is moist but not soggy. Taste and add any needed seasoning.

Add raw sausage, breaking up as needed to evenly incorporate into the mixture (you can do this by hand or use a fork if you don’t want to touch the raw meat).

Cover and refrigerate until turkey is ready to go in the oven (see note below).

Stuff in turkey cavity or put in casserole dish to bake covered alongside turkey. Cook turkey according to safe consumption standards (internal temperature of at least 165 degrees).

If making alongside the turkey, look for cooked sausage and tender celery and onions to indicate doneness. If you want a nice brown crust on top, uncover about 30 minutes prior to taking out of the oven.

This recipe is for an up to a twenty-pound turkey, which typically serves around fourteen people.

If the turkey is smaller, cut recipe in half or bake extra in a casserole dish alongside the turkey.

Stuffing can be made up to one day before and stored in the refrigerator until time to bake.

If there are any leftovers (and that’s a big “if”), stuffing should be refrigerated and can be reheated, covered, in the microwave or oven. Just add more liquid if it’s too dry.