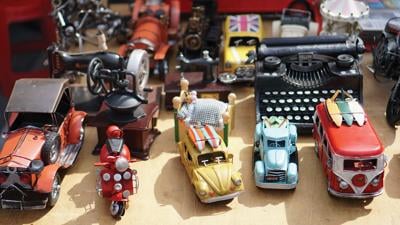 Does this sound familiar? You go to visit your parents or older relatives and, while you’re in their home, they take you on a tour pointing out all the stuff they’re saving for you (and any siblings or children you may have) to take “when they’re gone.” Or, even worse, ask you to write your name on sticky notes and place them on things you want—sad reminders that they will eventually pass on. Meanwhile, you neither want this stuff nor have anywhere to put it. You don’t want to hurt their feelings with an outright rejection, so, what can you do?

Talk to your older relatives about the treasure they want to bequeath you. What makes it valuable in their eyes? Is there a family story attached? Did an item come down through generations? Gently remind them that it is not things that matter, but the memories and stories associated with them.

If they are willing, help them  catalogue each item. This could mean snapping a picture of it on your phone and writing a brief description or history. You could also film or record your relative talking about their cherished items, which will provide you information about it as well as memories to cherish.

Cataloguing serves several functions. First, it encourages your relative to go through their stuff, so they actually know what they have. This process is likely to evoke memories they can share with you. Second, the list will serve as an index to get the things appraised. Even if they or you would never part with it, it’s helpful to know the value so it can be insured. Third, if it is agreed that items can be sold while your relative is still alive, it could provide welcome income to seniors on a budget. And, if you do take ownership, you’ll have a list to work off of if you want to sell anything.

For a small fee or with a membership, you can get stuff appraised online at sites like worthpoint.com or valuemystuff.com or take it in to a local shop (see the story on page 12 for suggestions). You can also check on sites like ebay.com to find similar items and see what price they’re going for.

Spending time with your older relatives is, in and of itself, a treasure for both of you. You will learn so much about their lives through what they chose to keep and value. And, your relative will benefit from the companionship and familial love engendered during the process. They will know that you value their things, without you having to be the custodian of loads of stuff you don’t need.

Country Living magazine lists items that often are sought after and highly valued. Keep a lookout for:

Video game consoles: Video game consoles from the 1980s are nabbing big dollars, especially when they’re unused and/or a rare edition. Individual video games—while available at every price point—can bring more than $20,000. Worth: $20 to $360,000

Mid-century barware: Well-known glassware companies such as Libbey, Federal Glass, Hazel-Atlas, and Culver can fetch high prices for retro cocktails glasses and barware. Worth: $15 to $1,500

Concert posters: Original big-name concert posters are hot and valuable now. Framed posters are more desirable and bring in the higher end of the $100-$1,000 range, although those of bigger headliners may bring much more at auction. Worth: up to $25,000

Milton Bradley board games: When it comes to resale, sealed, unopened boxes often double the value, but the retro nostalgia of childhood family nights equals dollars for most titles. Worth: $10 to $800

Toys: From Lite-Brites—no longer in production and now worth as much as $300—to a first-edition Barbie released in 1959 and valued at $8,000, vintage toys can have incredible resale value. Worth: varies

Lunch boxes: Boxes featuring Roy Rogers, The Beatles, The Jetsons, and even Rambo can score a lot of cash. Worth: up to $3,100

Duck decoys: Who knew? Duck decoys became highly collectable in the mid-20th century and prices have never been higher for pristine items. Worth: Up to $650,000

Baseball cards: The general rule is that the older they are, the more they are worth. There are a lot of nuances that determine a card’s worth though, so if you’ve come across a hoard of old cards, it’s worth getting them appraised. Worth: up to thousands of dollars

Fashion Accessories: Vintage clothing and accessories, such as scarves, handbags, and belts, can bring prices in the thousands, and even the tens of thousands if they bear a designer name such as Hermes, Louis Vuitton, or Chanel. Worth: up to $20,000

Jewelry: Have jewelry professionally appraised. Even vintage costume jewelry can be worth a lot. Worth: varies

Comic books: Of course, as with anything, rare comic books hold more value than common editions. Worth: up to several million

First edition books: A first edition of a popular book could net you thousands of dollars. Sites like Biblio.com can help you determine potential values. Worth: from $100s to $15,000 and more

Tools: There is a huge market for old saws, hand drills, planes, or any other old tools, both for their aesthetics and for their continued usability. Worth: varies.

Antique Christmas ornaments:  Today, the heavy, glass-blown ornaments known as “kugels” can fetch a pretty price. Worth: $50 to more than $1,000.