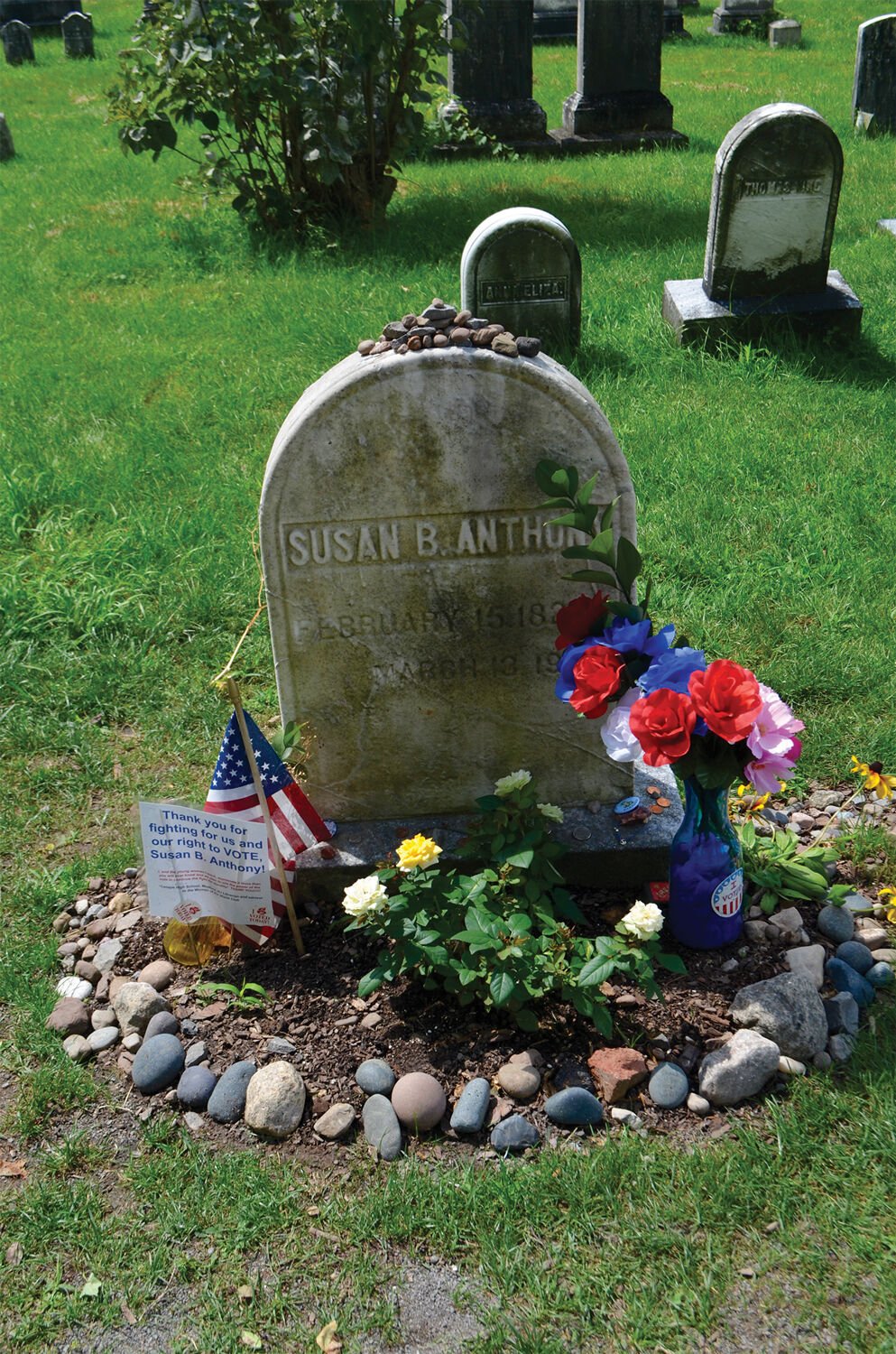 The gravesite of Susan B. Anthony is located in Mt. Hope Cemetery in Rochester. 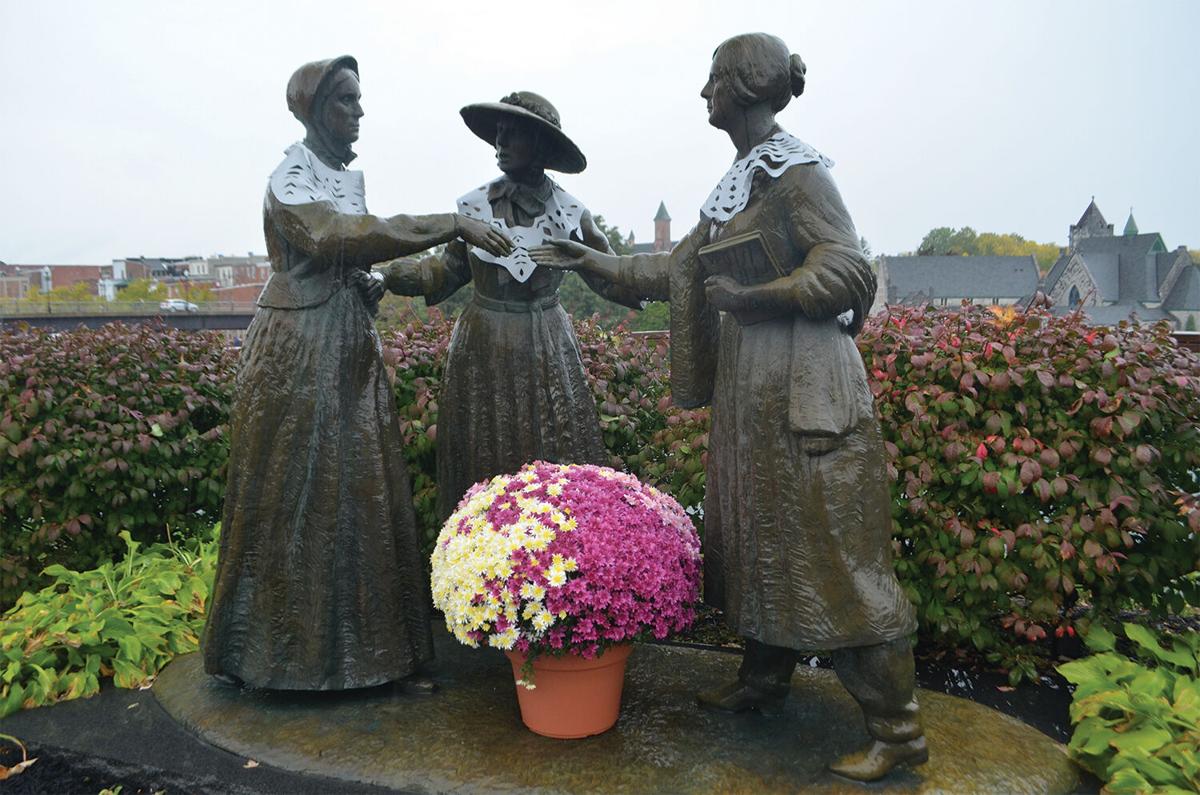 This year is the centennial of the Nineteenth Amendment, often called the “Susan B. Anthony Amendment,” granting women the right to vote. The campaign and years of fighting for this amendment began and was carried out in nearby Rochester and Seneca Falls.

A visit to The National Susan B. Anthony Museum & House, a National Historic Landmark, in Rochester brings her story alive. Born in 1820 to a Quaker family committed to social equality, Susan lived in this house with her sister Mary from 1866 until her death in 1906. It was also the headquarters of the National American Woman Suffrage Association. A true revolutionary, Anthony fought not only for women’s right to vote but also for their right to get an equal education and to own property.

“The year was 1872 when there was a knock at the door of this house and a federal marshal arrested Anthony for voting,” explains Linda Lopata, director of Interpretive and Visitor Services and our guide. “He took her to the police station on a horse-drawn trolley. The trial was later moved to Canandaigua, and the male-only jury was directed to find her guilty. She was fined $100 but she refused to pay.”

Visitors can see the bathroom with the tub where Anthony bathed in cold water until age eighty. She died in her bedroom at age eighty-six on March 13, 1906. A month earlier, she attended suffrage hearings in Washington and gave her famous “Failure is impossible” speech at her birthday celebration. Everywhere she traveled, she carried her black alligator bag filled with her papers, and it is also on display.

There was a blizzard on the day of her funeral and yet more than 10,000 people attended. A similar number placed “I voted” stickers on her gravestone in the city’s Mt. Hope Cemetery on election day in 2016. That event was observed with a Jeopardy question earlier this year.

The pair met in nearby Seneca Falls in a chance encounter. The meeting would change the course of the fight for women’s suffrage. That meeting in May 1851 is memorialized in a statue overlooking Van Cleef Lake. It portrays Amelia Jenks Bloomer introducing Anthony to Stanton. Their friendship gave direction and momentum to the seventy-two-year struggle for women’s suffrage. “It has been said, writes Stanton of Susan B. Anthony, “that I forged the thunderbolts and she fired them.”

Justice Ginsburg and the leaders of the women’s suffrage movement are among the 287 women inducted into the National Women’s Hall of Fame. The hall moved into the large former Seneca Knitting Mill just across the Seneca-Cayuga Canal in August. It is an ideal location because the building employed thousands of women over the years until it closed in 1999.

The beginnings of the movement were strengthened in Seneca Falls when Stanton proclaimed these powerful words: “We hold these truths to be self-evident: that all men and women are created equal,” at the first Women’s Rights Convention on July 19, 1848. Nine days earlier, Stanton and five friends had met and decided to hold the convention. More than 300 women and men gathered in the Wesleyan Chapel to hear the first formal demands for women’s rights. The local newspaper reported that “an intelligent and respectful audience” attended. At the next day’s session, the declaration was adopted and signed by 100 women and men.

The Wesleyan Chapel and other historic buildings from these early days of the women’s movement are part of the Women’s Rights National Historic Park operated by the National Park Service. The Visitors Center features exhibits on the history of the movement. Park Service guides conduct daily talks or conversations at important sites throughout town including the Elizabeth Cady Stanton House.