Oakland Place, one of the loveliest streets in Buffalo, has housed Buffalo’s high society for over a century. One of its most elegant structures is #70, completed in 1896. The building is a fine example of the Georgian style, and reflects Renaissance ideals made popular in England by Sir Christopher Wren. The classic red brick facade has a projecting central bay capped with a pediment, large double-hung windows, and striking fanlight and sidelights. Its facade demonstrates the rigid symmetry of its period, with corners framed by giant Ionic pilasters.

In 1967, the mansion was converted into three row houses by Hugh Perry, who inserted party walls and added an addition to the back to create new "front," "middle," and "rear" townhouses. While it was received as a most popular conversion at the time and did create two lovely new townhomes, it can’t be said that slicing the building like a loaf of bread did much to safeguard the integrity of the original structure. It detracted from the grandeur of the home and destroyed principal elements of the architect’s original design.

Also part of the 1967 conversion, the main entry for the grandest unit (which faces Oakland Place) was refocused to the site of the original porte-cochere at the driveway side of the building. The foyer was then repurposed as a dining room. Since Georgian architecture is marked by its geometry, the axial entrance and emphasis on that central pavilion—directing the entry from the original front door—crushed the home’s spirit. With the installation of heavy plantings, the insults were compounded over the years as the first floor became completely obscured by overgrown shrubbery and evergreens.

Now, that's all been corrected in one of the finest restorations Buffalo has ever seen. Owners Susan and Walter Dan Parker, whose other residences are in Arizona and New Orleans, favor lengthy construction projects—fueled by Susan’s passion for historic restoration.

The Oakland project is not simply an attempt to reach back toward a building’s history, but an exemplary effort  to restore  it  as faithfully as possible. The result shows tremendous restraint and respect. While acknowledging the quiet and private nature of the project, it should be wholeheartedly recognized and appreciated for its success and its exceptional standards of excellence.

The highest level of quality and design has been employed. No detail has been overlooked and the result—from first floor through to the third—is impeccable, which does not translate to opulent or showy. Rather, the newly restored property is laid-back, subtle, and sophisticated, a timeless blend of vintage charm. Craftsmanship and detailing might just have achieved a result that was even better than the original.

"Over the years, remodelers had ripped the soul out of this place, and we needed to bring it back," explains Parker. "Our goal was to restore as faithfully as possible, but to restore for today—to make it true to style and spaces but to be fully automated."

Therefore, although the house is steeped in history, it benefits from twenty-first century electronics. In the master bedroom, an elegantly framed mirror above the mantle transforms to a flat-screen television. What appears to be a true wood-burning fireplace jumps to flame with the touch of a button. In the principal rooms, distinctive Kittinger furniture has been custom crafted in sizes perfect to specific spaces. Fashioned in traditional styles appropriate to the home, beautiful woods gleam on the perfectly proportioned breakfront and buffet. There’s also a very handsome custom cabinet whose doors open to reveal the enormous curved screen of a smart television.

The immediate breathtaking feature of the house is the restored oval staircase, which dramatically climbs three levels. When it was sanded in preparation for repainting, it became obvious that layers of paint alone had been holding it together. Therefore, each rung of the baluster has been removed and reglued, and every fourth post drilled to insert a metal rod for strength. Once done, the ugly reinforcing bars that had been added over the years could be removed. The stairwell restoration became a five-week process in itself. The result is no less than spectacular.

Stairway lighting was a challenge. At the turn of the last century, it was probably lit by a single lantern. A previous remodel used a twenty-two-foot Noguchi paper lantern that incorporated fluorescent lamps. The new solution has been to replace that fixture with a custom, three-tiered, three-story lantern fixture in a complex installation that required scaffolding and a day’s labor. The beautiful art glass of this new lantern now glows in opalescent colors and subtly lights the stairway and its surrounds on each of the home’s three stories.

The kitchen has been totally redesigned. In addition to enabling a better work pattern and improving the physical structure to accommodate mechanicals, it now includes cabinetry, woodwork, and wallpaper appropriate to the architecture of the home. The new kitchen features an induction cooktop, steam oven, and Danby marble countertops from Vermont. A swinging door that provided access to the room (thought to have been a study for the first owner) has been removed and its framework converted to a bookcase. Inspired by vintage dishes, a lighter color palette has been chosen, with the kitchen floors stripped and stained to match the rest of the home.

Interior designer John Lassila, who had worked with the owners on previous properties, notes that the couple "didn’t want the house to be a museum piece—they wanted to keep it fresher, younger, and more unexpected with a new interpretation to deformalize the house." For example, the paper in the central hall is a contemporary interpretation of a historic document pattern that might have been used originally, its scale beefed-up. The original color palette would have been very different than the blue-greens that are used today. For the powder bathroom, a scenic paper depicting historic scenes of Niagara Falls is being hand painted to be installed this winter.

The master bedroom is particularly pleasing. The soft purple walls show off the deep molding and woodwork. Beautiful chandeliers enhance the space. Vintage quilts are the starting points for bedroom designs. A former closet has been converted to a second floor laundry room with great cabinetry, stunning quartz countertops and mosaic backsplash. Each bathroom in the house has been redone in perfect blends of vintage and contemporary tiles, natural stone, porcelain, fixtures, and hardware.

The third floor ceiling was raised, its parapet walls opened and replaced with clear leaded glass in delicate oval patterns to match the original second floor windows. The ceiling is warm beadboard, the walls a gorgeous grasscloth. A nook in the upstairs hall has been reinvented as a cozy space that seems like it always existed.

The home retains some of the finest architectural features of the Georgian style in its refined fanlights, pilasters, and detailing. Artwork was selected prior to decor, so each piece is enveloped in a room where it belongs.

Outside, the front porch was totally rebuilt with new rails to current code. With the overgrown landscape removed, neighbors can now appreciate the beauty of the house, and visitors can walk through the front door for the first time in well over a half century.

Original Architect:   Boughton & Johnson (James Johnson would soon leave the partnership to become part of the prolific architectural firm of Esenwein & Johnson, many of whose homes have been featured in Spree over the years.)

Original Clients:   Robert W. Pomeroy and his wife, Lucy Bemis (Pomeroy became one of Buffalo’s leading financiers, and the family eventually moved to an estate just north of Grover Cleveland Park in Amherst, which is now the Pomeroy Park subdivision.)

Barry A. Muskat is Spree’s architecture critic and longtime contributor. An architectural historian, he has served on the city’s Preservation Board, and orchestrates major renovation projects. Learn more about the houses on Oakland by reading Martin Wachadlo’s popular book, Gracious Living in Buffalo: Oakland Place. 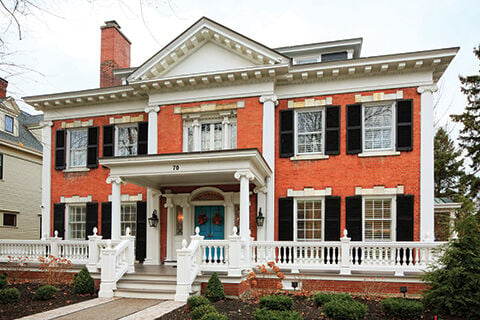 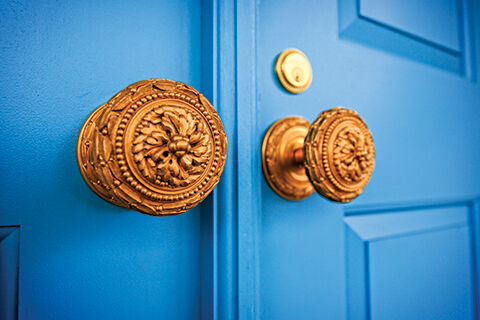 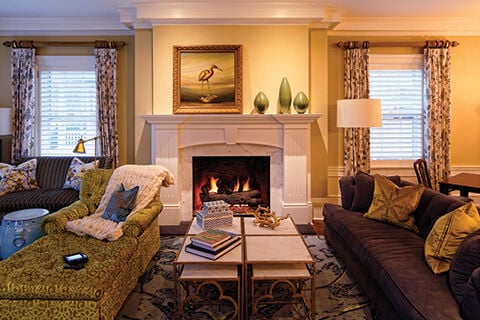 A custom cabinet disguises the TV set when not in use. The original woodwork includes Georgian pilasters and other detailing. In the same room, a gas fireplace has been installed. 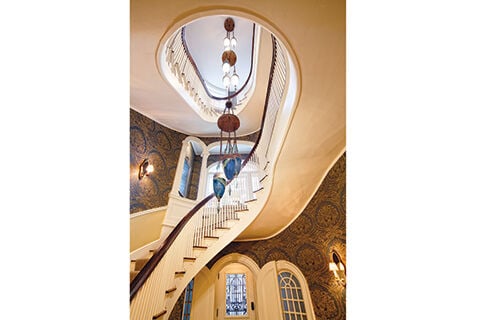 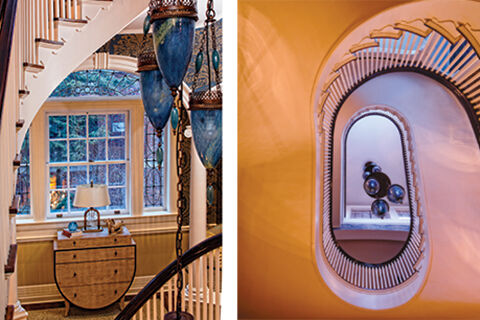 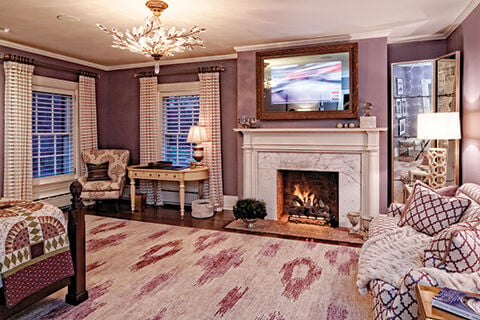 he master bedroom features soft purple walls and a vintage quilt, which inspired the color choices. The mirror over the fireplace transforms to a flat-screen TV. 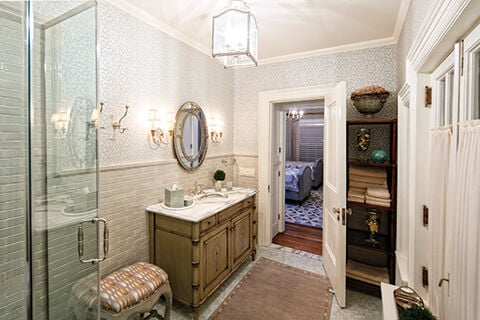 The bathrooms have been redone in blends of natural stone and vintage and contemporary tiles. 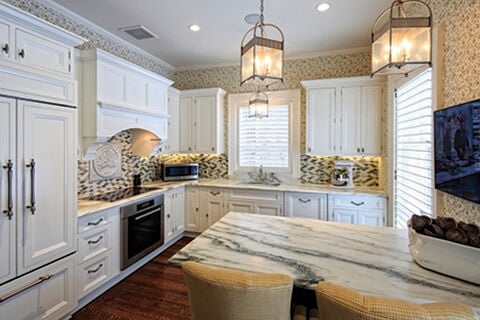 A custom cabinet disguises the TV set when not in use. The original woodwork includes Georgian pilasters and other detailing. In the same room, a gas fireplace has been installed.

he master bedroom features soft purple walls and a vintage quilt, which inspired the color choices. The mirror over the fireplace transforms to a flat-screen TV.

The bathrooms have been redone in blends of natural stone and vintage and contemporary tiles.