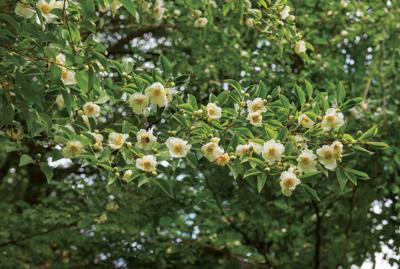 From April through October, a nursery person is likely to hear the dreaded sentence: “I want a small tree for the corner of my house.” Sometimes the homeowner wants to put the small tree in a small bed in the front yard or in a three-foot wide border around the yard. The one thing they’re sure of: it must be small.

The responsible nursery person then has choices:

1) Share with the homeowner the definition of “a small tree,” explaining that, in arboriculture or tree science, a small tree grows fifteen to twenty-five or thirty feet tall. Very few species stop growing at ten or twelve feet, and often the short stature is because they grow slowly.

2) Convince the homeowner to plant farther out in the yard, rather than in the “foundation bed” next to the house (where a normal “small” tree will outgrow the space soon). A small, twenty-to-thirty-foot tree will look great at a distance.

3) Recommend some lovely medium to large shrubs of various shapes, if the customer really wants a woody plant near the corner of the house or in the smallish bed. A medium shrub is usually six-to-twelve-feet tall, and a large shrub grows taller than twelve feet.

4) Recommend grafted plants called “standards”—such as hydrangea “trees,” which are really shrubs grafted onto single trunks. Weeping—also grafted—plants can stay small in a limited space.  It’s important to clarify that some grafted plants may not be as hardy for extreme weather conditions (at the graft point), and some weeping plants will need pruning, as future shoots may grow straight up.

Next, after explaining some of these things, the nursery person often hears the next dreaded question: “But we can keep it short, can’t we?”  No. You can’t make a tall plant short.

Woody plants do not usually thrive (or look well) when they are “topped.” Even a “small” Japanese maple wants to look like a maple tree, with a tree shape, and most of them aim to be twelve to twenty feet tall. If you keep hacking at it, you’ll always have to do so. It just didn’t belong where it was planted.

Similarly, a multi-stemmed woody plant, usually called a shrub, is not intended to be “kept short”—as in flat-topped. Most shrubs have an attractive, natural shape, and require only occasional corrective pruning. The exceptions would be a few plants such as yews or boxwoods that are purposely clipped into hedge or geometric shapes, or a few flowering shrubs that some like to keep round.

When there’s room for tall trees

Nature-lovers and ecologists encourage us to plant native trees of any size. Native willows (Salix), cherries (Prunus), and oaks (Quercus) are the most valuable species we can provide to support healthy ecosystems. When in doubt, plant a native oak tree, and give it room to mature out there in the yard, so that it can provide shade and ecosystem services for generations.

This is the right time to plant a tree, small or large, in a suitable site, where it can outlive us all.

Just like “small,” the word “dwarf” may mislead you. Technically a dwarf tree just means it is much smaller than the normal species plant. Some junipers called “dwarf” might grow to fifteen feet, while the parent species would typically be forty feet or taller in nature. Some definitions say that a dwarf tree will grow to about a third or a half its species size. Several catalogues define “dwarf” as shorter than ten feet. Just don’t think it’s three feet tall! Read the tags, ask the pros, and do your research.

Members of PlantWNY, the International Society of Arboriculture, and Certified New York Stat…