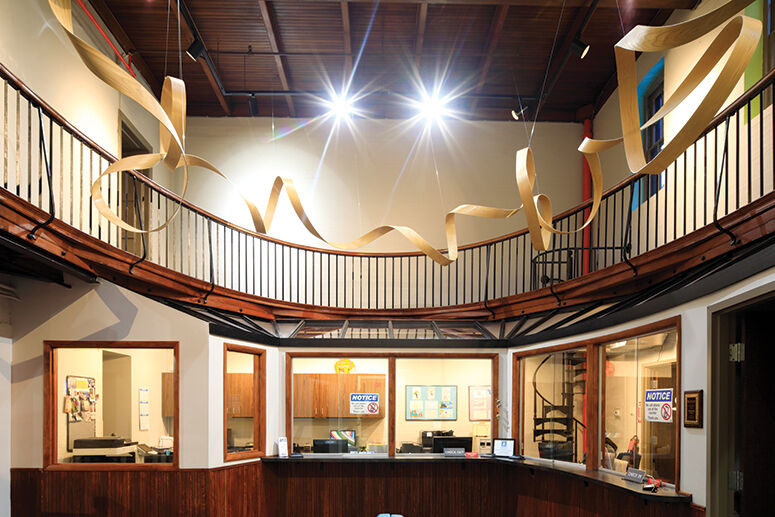 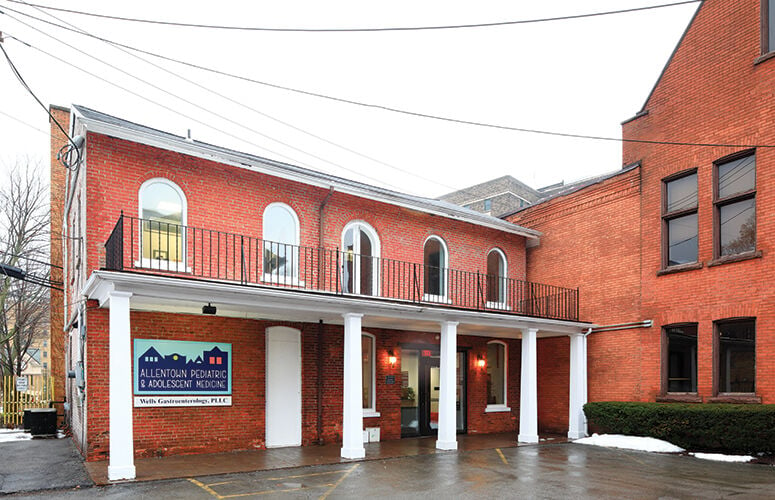 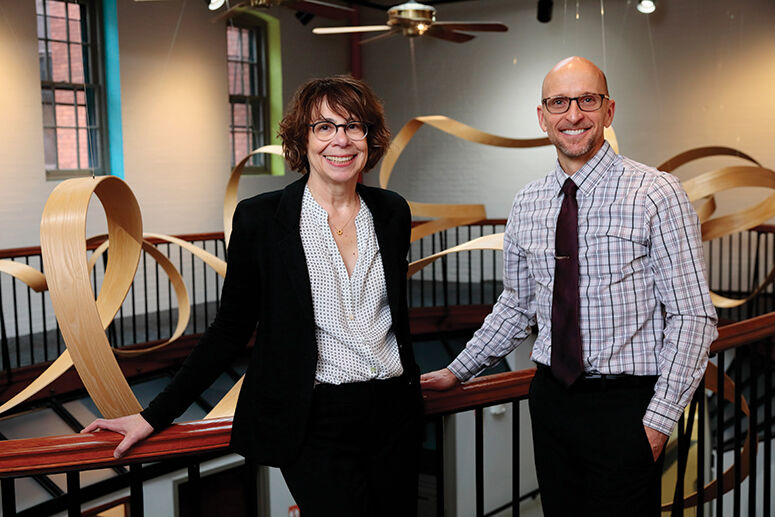 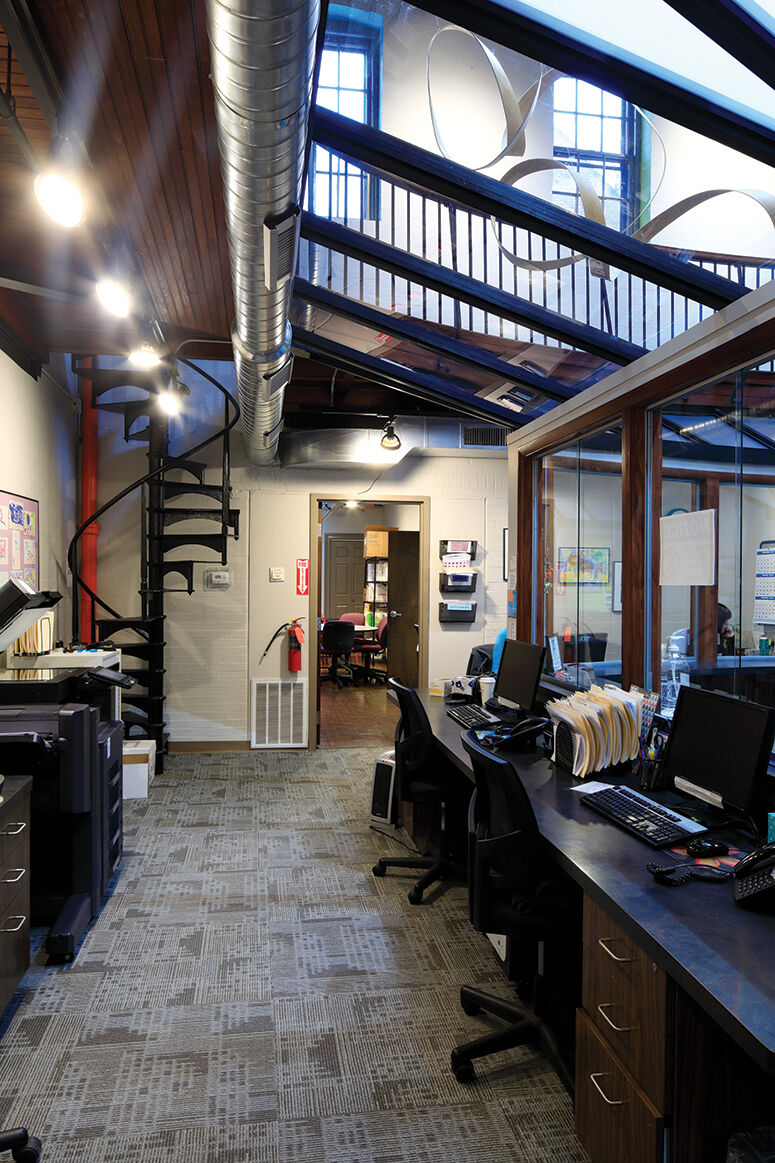 Original architectural details are prominent in all the spaces, even back offices 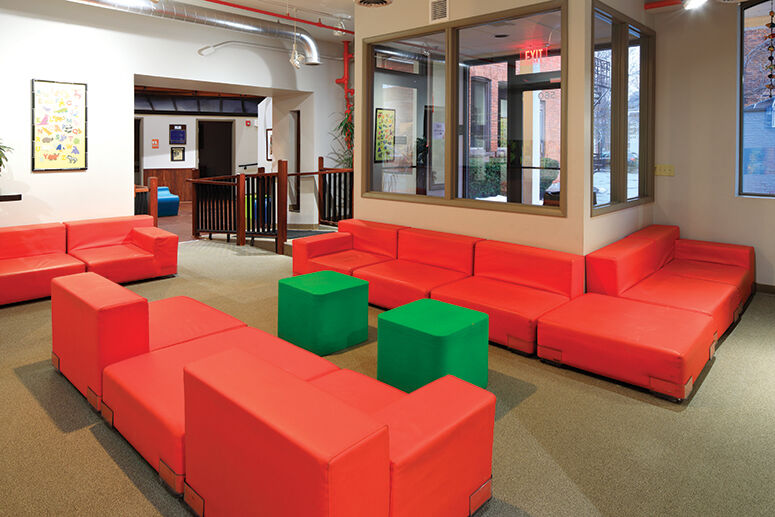 The large waiting room features colorful, practical furnishings; ramps have been incorporated into the design to accommodate the different floor levels between adjacent buildings. 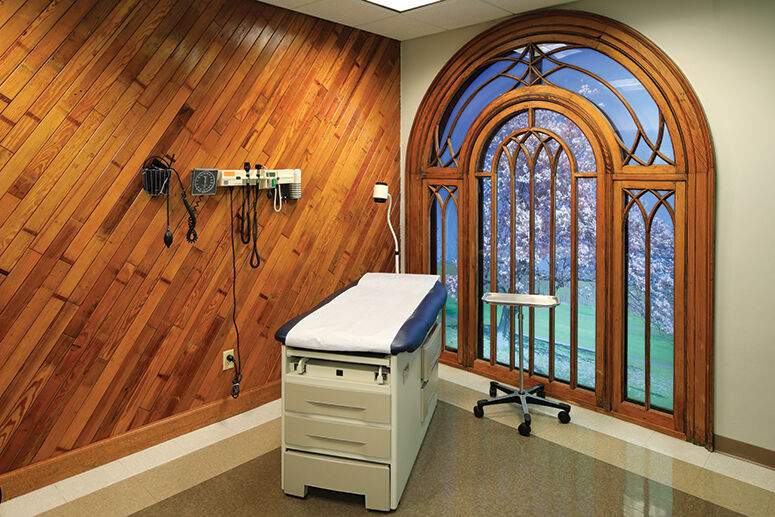 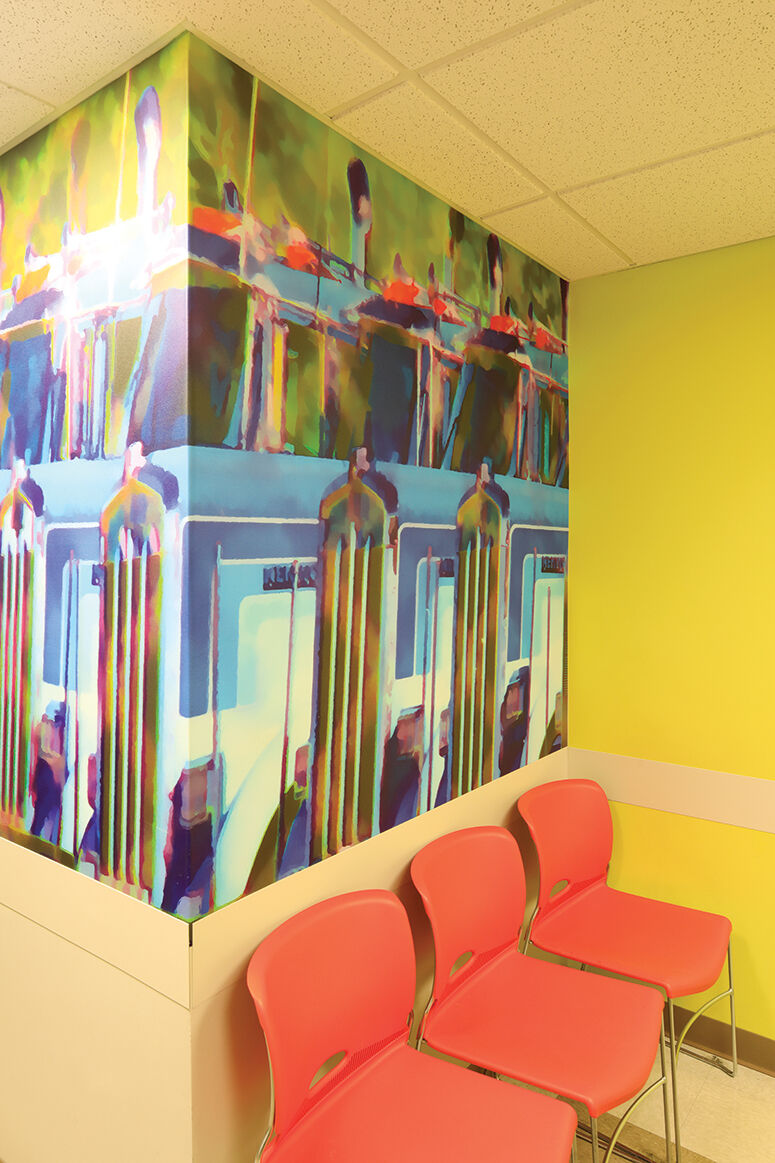 Enlarged photography by Robert Schulman adds drama throughout the space. 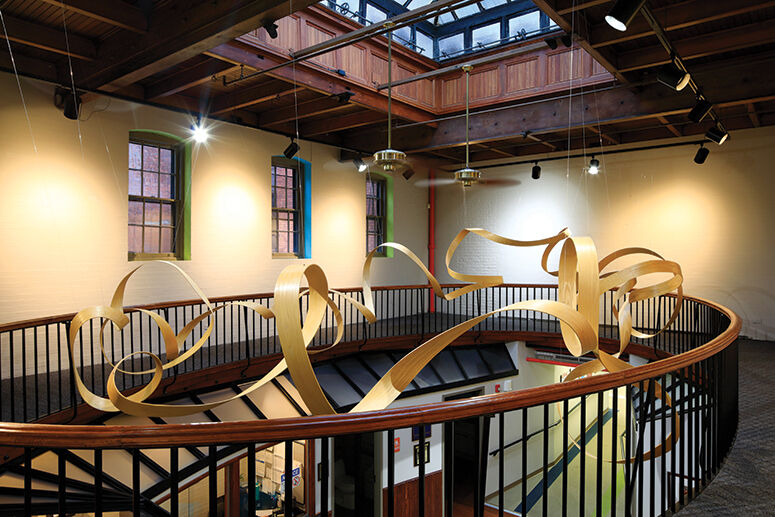 With few exceptions, physician waiting rooms and offices fit into a dreary pattern that seems appropriate to the boring structures in which they’re usually located. Rectangular rooms. Chairs that don’t offend. Yawningly neutral walls. Carpeting that shows the least wear and tear. Although medical equipment may be hi-tech, the criteria for excellence in waiting rooms is minimal.

Allentown Pediatrics started fifteen years ago with two doctors, one receptionist, one nurse, and a single chart on the rack. The practice grew slowly but steadily, eventually outgrowing its offices at 505 Delaware Avenue. The doctors were determined to stay in Allentown; the name of the practice symbolizes its commitment to patients throughout the nearby neighborhoods who reached them by foot, bus, car, and train. A new office was needed, one worthy of its diverse, vibrant constituency.

Deborah Raiken, one of three doctors in the practice, describes Allentown Pediatrics as a melting pot of families that have varied structures and ethnicities, but share the same goal of raising healthy and happy children. She feels that the new office is "a whimsical, beautiful space with soaring sculptures and brilliant colors that celebrate our families. Our mission is that the care delivered here equals or surpasses the physical beauty of our new office."

Allentown Pediatric’s new premises is located to the rear of several Allentown historic structures; it’s positioned like a carriage house. The Clinton House (556 Franklin Street) is a large structure in the Italian Villa style; according to A Field Guide to the Architecture and History of Allentown, it was built by Phineas Marsh in 1867. It was purchased in the 1920s by Marshal Clinton, a descendent of New York governor DeWitt Clinton of Erie Canal fame. The building was subsequently purchased by the Sisters of St. Mary of Namur in 1942 to provide additional space for St. Mary’s Seminary for Girls, housed next door at 564 Franklin. In the early 1970s, the buildings, by then badly deteriorated, briefly housed the New School for the Performing Arts. Prime candidates for the wrecking ball, the structures were saved in an early preservation effort. The Clinton House served as the home of the Empire State College and the rear addition had an art gallery and varied office spaces. Today, the Clinton House is home to the Lee Gross Anthone Advocacy Center and 564 Franklin houses a dental practice. The gym from the former girls’ school, to the rear of these buildings, forms the heart of Allentown Pediatrics.

Throughout the medical offices, there are echoes from its former uses, including wonderful interior and exterior walls of brick. Mark A. Dean, principal of Dean Architects, undertook the conversion of two separate buildings, the smaller of which is now used for the practice’s entrance and waiting area, with offices and exam rooms on the first floor. The larger building, which had a substantial addition (formerly a gymnasium), features an enormous industrial skylight. That became the main reception area. Although the two buildings were attached, there had been no connection between the main structure and the gym.

"To create a functional office, we had to break through brick walls and join disparate parts of this old building," Raiken notes. "But it was paramount to maintain the grandeur and architectural beauty of the original gym with its vaulted ceiling, windows, beautiful wood, and natural light." Dean notes that there was very little exterior work that affected the historical integrity of the building. The biggest challenge was physically connecting the newer building with the old and making it watertight. The most significant design challenge was converting the gymnasium area to usable space for reception and patient triage, while maintaining the beauty and history of the space.

A second challenge in the project presented itself when the walls were opened and the three separate areas of the buildings had floors at different levels. Stairs and interior ramps were seamlessly integrated to allow flow and universal accessibility to all areas.

Previous interior renovations lent themselves nicely to adaptations as exam rooms. Varied in size and shape, many of these exam rooms feature original architectural elements in textures, paneling, and wainscoting. A nurses’ station is housed between original brick walls, with tall arched openings forming a stylish space. A brick courtyard is backdrop to planters of flowers in season.

Michael Poczkalski of room was also involved with planning of the spaces, and states, "When designing the main space, we tried to incorporate elements of the original design. For example, we extended the reception windows to have a similar ‘skylight’  as the original one located on the second story. This was not only a historic nod, but it solved an issue on how to extend the office reception space into the main oval of the original structure."

"A medical practice can exist in many different settings," notes Daryl Ehlenfield, another physician in the practice. "The difference here is that we were willing to invest time, energy, money, and talent." Ehlenfield also compliments the building’s owners, Sinatra and Company, stating, "They never questioned our desire and determination, and worked toward the goal of preservation and rejuvenation of this property."

There is original artwork throughout the offices. The Allentown Art Festival is represented with a hallway lined with framed posters from each of the past fourteen festivals. Ehlenfied notes, "Collecting and displaying them seems completely logical and a fitting tribute to the neighborhood, the artists, and the festival that make Allentown unique."

More sensationally, each of the exam rooms includes original works by artist Robert Schulman, whose award-winning photography is featured in a growing roster of galleries and collections. Here, his photographs have been enlarged to spectacular effect. The subject matter—architectural, industrial, landscape, or undefinable—makes for bold, colorful, and elevating imagery. Each room features a different image or combination of photographs, carefully composed and casually presented. They set an unexpected tone for the spaces that’s dramatically different from that of a typical medical office. The doctors explain that half their constituency is adult, and they had no desire to use cartoon characters that easily become dated. They also wanted to promote a local artist and give families exposure to original art.

A large sculpture sets the tone for the principal spaces. Ithaca-based artist Jeremy Holmes constructs abstract wood sculptures by joining together long lengths of wood made thin enough to bend and twist into different configurations. His sculptures help viewers become aware of the whole volume of rooms they complement. In this case, his construction dances around the oval of the former gymnasium and moves the viewer’s eyes with its line. Holmes explains, "My intent was to mimic the room and architecture, not take it over—to make the installation light and airy, and to give it a mobile feel as it floats above the reception area and leads visitors from the main desk lobby to the patient rooms."

At Allentown Pediatrics, the office planning carefully considered patient arrival, reception, and waiting time, as well as the examination and treatment spaces. Even the back offices and nurses’ station are exciting spaces. The care with which these plans have been implemented reflects the doctors’ consideration of and respect for their patients.

Stuffed with ground beef or chorizo, these stuffed peppers can be a…