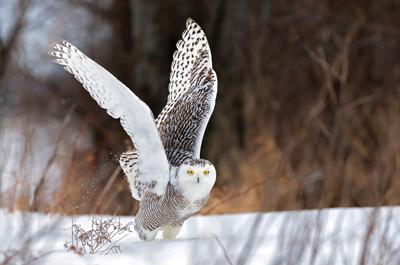 Most of us are creatures of daylight. When the sun sets, we retreat indoors, venturing out only to get from one enclosed area to another, and for good reason: without assistance, humans can’t see much at night. Most birds are the same and find roosting spots for the evening hours—with one notable exception. Owls (strigidae) can see in the dark, because their eyes have many more rods than ours do; these extra rods reduce the number of cones, leaving them nearly blind in the bright light of day.

Because our time outdoors overlaps so little with owls’, we rarely interact with them. With a little effort, however, you can find three common owl species here in winter.

We usually think of owls as hooters, but the little screech owls are actually whistlers. Several of my friends can mimic their whinnying call, and they are often rewarded not only with reply, but also approach to nearby trees where the owls can be seen by flashlight. These are small owls, less than nine inches in length—robin-sized—but their fluffed-out feathers give them the appearance of larger birds. Their plumage is striped and they have short ear tufts. There are two color forms: red and gray. In winter, these permanent residents dine primarily on rodents, shrews, and small birds. Visit a local woodlot this time of year and you will have a good chance of hearing their calls, especially if you can invite them with your own.

Just as the snapping turtle is the scourge of the swamp, the horned owl is the scourge of the forest. Almost two feet in length, these are big, powerful birds and any small animal up to the size of a raccoon—including pet cats and dogs—should fear the silent nighttime predators. Mournful hooting characterizes woodlots where great horned owls reside and occasionally is heard in cemeteries. Owlers—those who seek out these species—refer to horned owls as six-hooters. Roger Tory Peterson records the calls of males as a low-pitched, resonant “hu-hu-hu-hu, hoo! hoo!” with females responding in slightly higher pitch. Like screech owls, they often respond to imitations and approach the callers.

The snowy owl is a rare daytime predator. Normally found in the tundra and muskeg of the far north, this species has become a regular winter visitor to this region. Find a good vantage point along the south shore of Lake Erie and—using a telescope or powerful binoculars—you will often see several of these birds resting on the breakwall. They rise occasionally to pick off one of the hundreds of ducks or geese sheltering nearby. As soon as waterfowl see an airborne owl, they rightly become frantic and fly or dive for their lives.

The snowy owl is white with bright yellow eyes. Individuals are also often seen at local airports or along the Lake Ontario plains.

A few barred owls, most of which retreat farther south during the coldest months, and saw-whet owls that regularly migrate through the region, stay through the winter. And when mouse populations explode, lovely short-eared owls gather to flap moth-like over those fields. Finally, there are three rare visitors to this region: hawk owls, great gray owls, and boreal owls. Spotting individual birds of this group is cause for celebration among bird watchers.