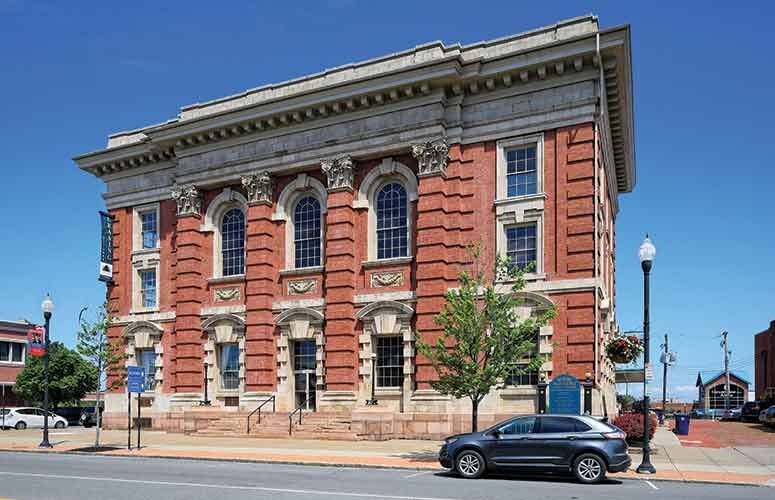 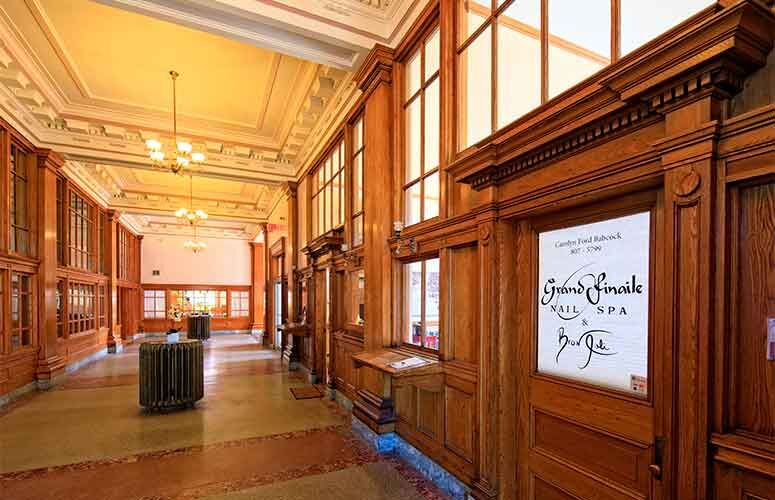 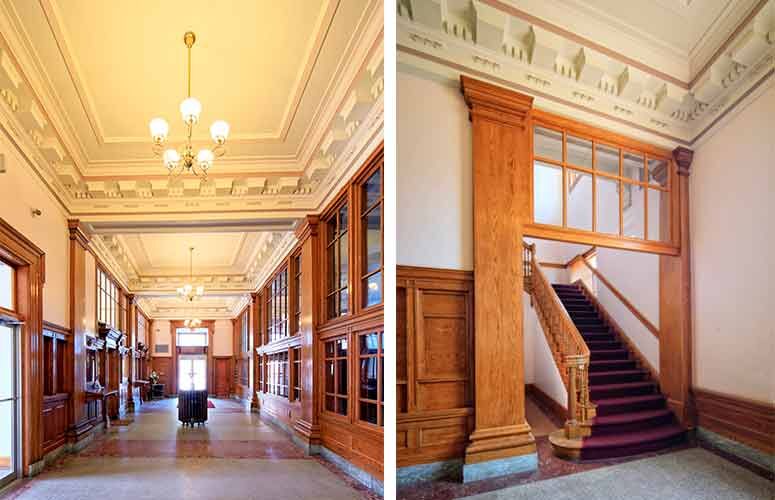 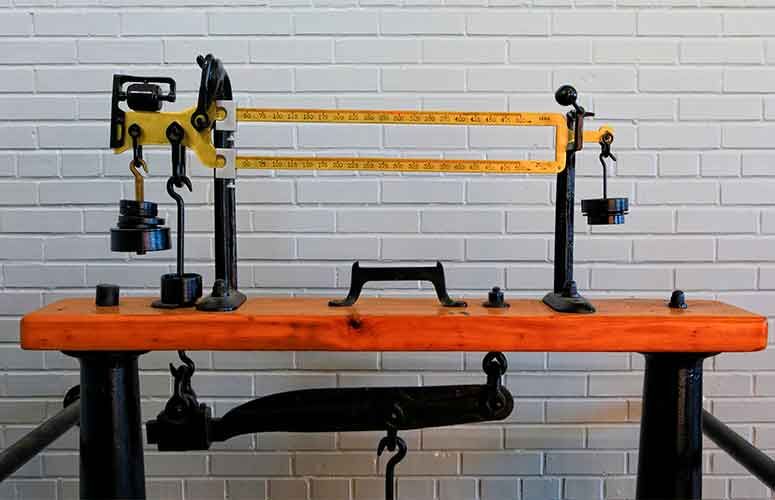 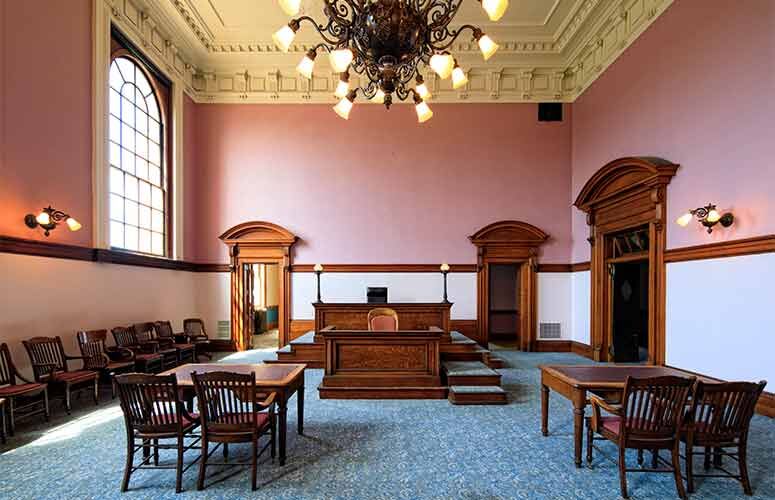 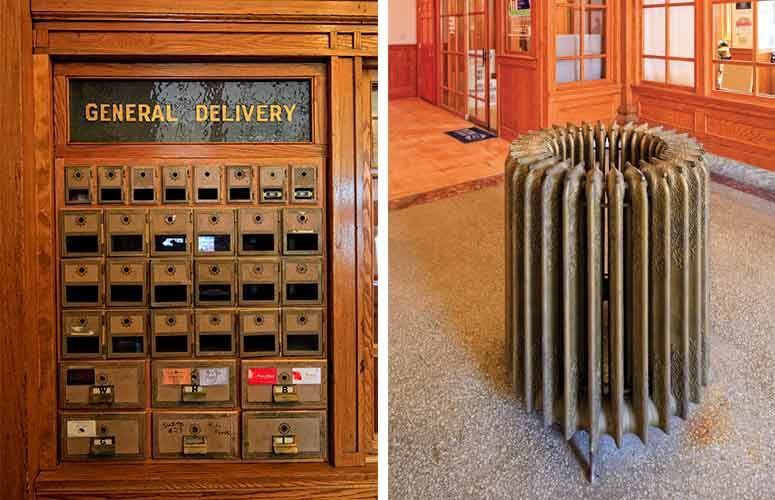 This second floor federal courthouse was in service for three decades. Cast iron round radiators and a small selection of postal boxes are still in place.

The splendid three-story Beaux Arts red brick building located at 1 East Avenue on the corner of East Avenue and Elm Street in Lockport, New York, used to house the Lockport Post Office. Although the Post Office moved further east on East Avenue in 1991, the old building is being reborn as commercial office space. Currently the building houses Lockport’s Main Street program as well as several service businesses including a hair salon, nail salon, a healing artist, and music tutors.

Lockport became the county seat for Niagara County in 1822 but was part of Genesee County until 1808. Although the northern portions of the county developed in the late 1700s, Lockport developed primarily after the 1820s. The village of Lockport was formed in 1829, and, by 1865 had grown large enough to be incorporated as a city. Much of this growth can be attributed to the overwhelming success of the Erie Canal, which opened in 1825, and sported the world-famous "Flight of Five" set of locks at the west end of the city. Rising sixty feet, the locks are still a popular tourist spot.

The first Lockport Post Office opened in 1822 in a simple wooden structure and by 1843 had moved into a smaller brick building. Lockport’s population continued to grow throughout the nineteenth century, and, in 1899, approximately $100,000 was allocated for a new building. Construction began on what was then the new Post Office in 1902 and the building was opened in August 1904. A rear brick addition dates to the 1930s.

Like many Post Offices of its era, the building’s design is credited to James Knox Taylor, who was the supervising architect for the US Department of the Treasury from 1897 to 1912. How much involvement Taylor actually had in the design and construction is not known, but he did personally change the ornate exterior trim to terracotta from the less expensive wood in the original specifications. This added to its attractiveness and no doubt extended the life of the building. When it was listed on the National Register in 1989, it was the oldest operating New York Post Office of Taylor’s.

The Beaux Arts style of the Lockport edifice is much different than the Richardsonian Romanesque style of the Buffalo Post Office, also credited to Taylor. The Beaux Arts period started in the late ninteenth century with a number of American architects studying architecture at the Ecole des Beaux Arts in Paris. Although starting circa 1885, the style became very popular after the success of the Columbian Exposition in Chicago in 1893, and many of the buildings at Buffalo’s Pan-American Exposition were also Beaux Arts. Typical buildings of this style are highly ornate masonry buildings with flat or mansard roofs, symmetrical facades, generally featuring quoins and pillars/pilasters and often rusticated stonework of multiple types of stone.

In addition to the Flemish Bond brick masonry construction, the Beaux Arts features of the old Lockport Post Office include a symmetrical five-bay front facade, flat roof, four pilasters with terracotta bases, and composite capitals dividing the five bays, as well as quoins. Three large rounded arch windows accented with terracotta trim occupying the center of the second and third floors add to the opulent appearance.

The building’s interior is also highly ornate in the original 1904 portion. The first floor retains the chestnut woodwork, staircases, and terrazzo floors trimmed with red marble. Two round cast iron radiators are still in place on each end of the main hall and a small section of postal boxes remain in the west end. In 1990, when the building was purchased by Michael and Patricia George, they removed the drop ceilings added by the Postal Service and now the boxed ceilings with dental molding accentuate the original ceiling height.

On the second floor is a federal courthouse that was in service for approximately three decades; there is additional space on the third floor. These floors are not open to the public but Iskalo Development, who purchased the building in 2015 and also owns the historic Electric Tower in downtown Buffalo, has plans to install an elevator and renovate the upper floors. Although closed for nearly thirty years, the old Post Office is still majestically anchoring its prominent section of Lockport’s main street. It continues to serve to preserve Lockport’s history as well as help position the city for a bright future.