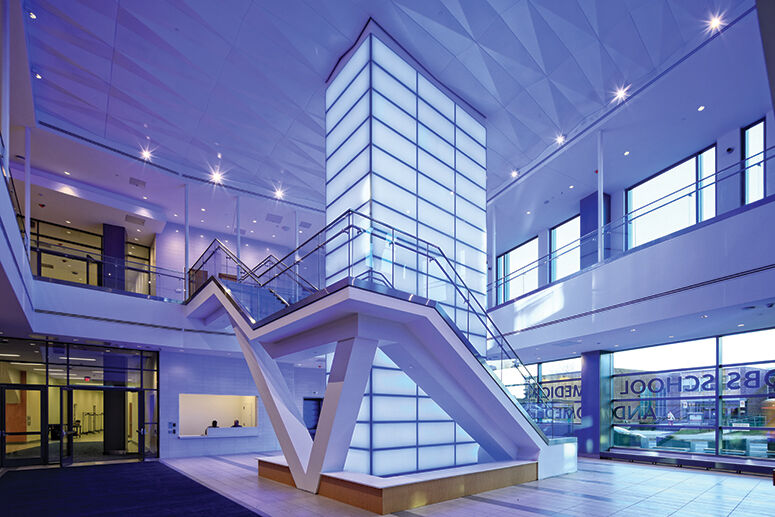 The Main and High Street lobby features a tower of changeable light. The frosted glass panels mix with clear glass parapet walls, white subway tile, panels of burled natural-maple veneers, and brushed steel. Stairways ascend to the piano-nobile level of the building where the atrium begins. 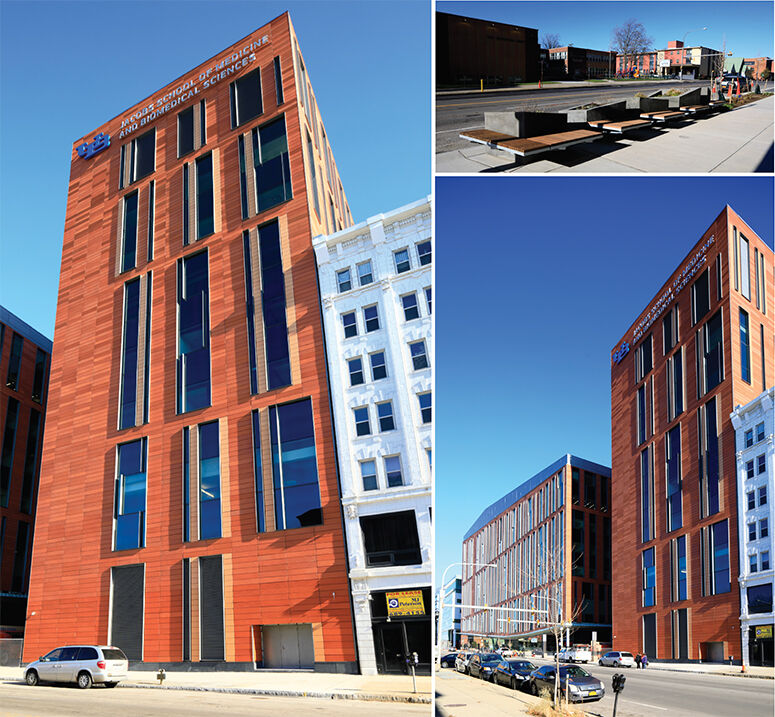 The school’s exterior terra cotta is in a contrasting shade to the Roosevelt Building’s white terra cotta, next door; concrete planters and steel/redwood benches add interest to the streetscape. 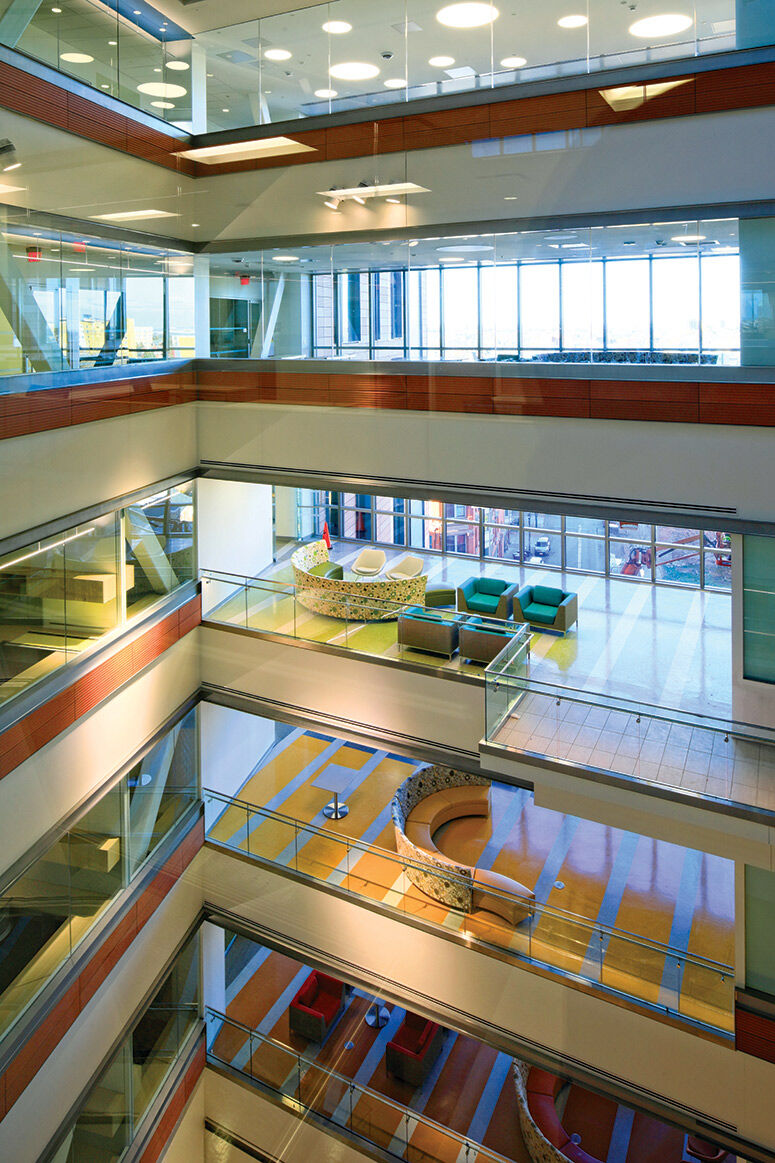 Every office, conference room, and simulation operating room has full views from the atrium and various floors above and below. The message: transparency. 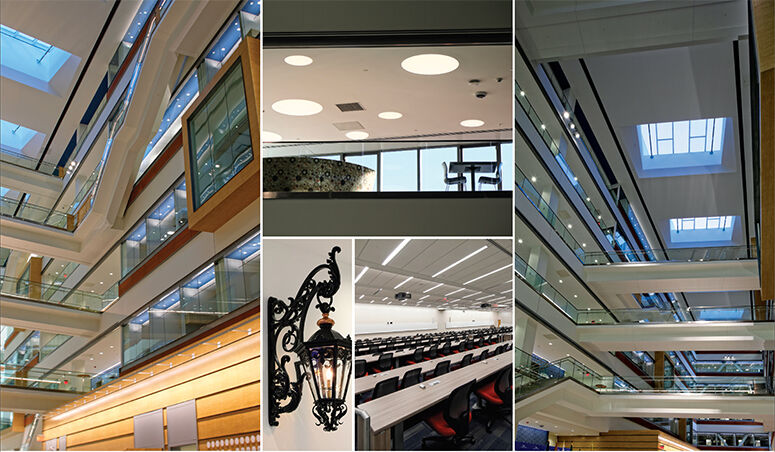 Clockwise from left: The white, sculptural stairways are not hidden—they are exposed, even flaunted; lounge spaces allow for casual interactions; the atrium’s skylights allow daylight to penetrate the entire floor plate; classrooms can be divided or expanded to accommodate large groups; historic lanterns were found and restored to lend a sense of history to the new facility.

Jacobs School of Medicine and Biomedical Sciences by the numbers:

Students, faculty, and staff on site

Additional doctors being educated in Buffalo each year

Cost of the project in dollars

Square feet of glass on the perimeter

Huge skylights that flood the atrium with natural light

The new facility’s full name is University at Buffalo Jacobs School of Medicine and Biomedical Sciences, and it is a centralized hub of clinical patient care, research, and innovation. In the changing world of academic medicine, this bright building makes new statements about Buffalo and about medical education.

Main Street itself used to be the physical, psychological, and economic divide of the city. As Rudyard Kipling wrote, "Oh, East is East and West is West, and never the twain shall meet." But now there is barrier-leveling development at a crucial intersection; it includes the Conventus Center, Oishei Children’s Hospital, Gates Vascular Institute, and UB’s new facility, all part of a vibrant mixed-use district. The Allen/Hospital station of the Niagara Frontier Transit Metro is now integrated and empties at ground level of the medical school, while Allen Street itself, which had dead-ended at Main, now invites pedestrians to cross the great divide.

The most exciting architectural component in the medical school is its enormous atrium, which, however, is invisible from the exterior. The parcel from Main to Washington is a wide urban block, with the medical school composed of two L-shaped buildings that wrap-around to create and embrace the atrium feature. According to Kenneth Drucker, design principal for HOK architects’ New York and Philadelphia offices, the Allen Street recess "rivals the space of the atrium and allows daylight to get deep into the building." There’s another reveal on the Washington Street side of the building performing the same function.

Drucker wanted one of the masonry volumes to be taller than the other. The taller structure is next to the Roosevelt apartment building (at Main and Carlton) so that it appears to be more of a tower. From this south end of the building, the structure climbs with the topography of Main Street and floats above it with an angular canopy that engages the rapid transit station.

The building has no front or back. All the facades are equally important, but it was decided that the main entrance would be at the corner of Main and High Streets. Because of the need to separate the public and academic uses, the second floor becomes the ground floor of the medical school. Its lobby features a tower of changeable light. Stairs ascend upward to what the architect describes as the piano nobile level, thereby allowing pedestrians to pass through the building as it connects to the rest of the medical campus.

Kelly Hayes Macalonie, associate director of Capital, Facilities, and Space Planning for the University, led the initial planning for the new medical school building. Working within the mandate for its downtown location and leading the preprogramming, that work became the criteria for the architectural competition led by dean of the School of Architecture and Planning, Bob Shibley. The initial planning included examination of a changing pedagogy in medical education, location and site analysis, costs and resources, and elaborate orchestration of logistical questions. The vigorous planning may be a good part of the reason the actual construction of the facility proceeded smoothly with remarkably few glitches. The winner of the architectural competition was HOK, a global architectural design firm with seventeen hundred employees and offices in twenty-three cities. HOK’s Drucker notes that the intent was always to make the building contextual with Buffalo’s rich architectural tradition, so the use of terra cotta made sense, especially given  the polychromatic nature of City Hall. With the white terra cotta Roosevelt Building immediately next door, Drucker decided there should be a contrasting color. The result is a building clad in custom terra cotta panels crafted by Boston Valley Terra Cotta.

Light is an important element of the design. Drucker points out that the key to a successful large-footprint building is to let in natural light. Hence, the large fenestrations on the facades, which relate to the urban scale and then to the medical school scale. In order to get daylight deep into the floor plate, the atrium is punctured with seven skylights.

With the trend in academia involving interdisciplinary sciences, the intent was to create spaces where students and faculty can casually congregate. That opportunity for casual collisions is welcomed by the more informal lighting of the lounge spaces. The large unobstructed windows on the exterior and the atrium interior clearly convey the intent for the building occupant to see out, but also to be seen as well. Every office, conference room, and simulation operating room has full views from the atrium and various floors above and below. When asked about this, Drucker notes, "When we design science and educational buildings, we look for transparency between different disciplines. We want openness, a free exchange of information, and for everyone to see what’s going on." Therefore, the sharing of information is facilitated and encouraged by the design.

The new medical school is both a teaching and research facility, meant to attract and retain faculty, increase prospective student interest, and increase enrollment. Its goal is to improve care and clinical services. Its downtown presence, adjacent to the medical campus, puts it right in the heartbeat of the medical community and will mold the culture of its students.

The structure itself consists of bold intersections, with huge cross-braces that powerfully slice through stacks of floors, creating vibrant dialogues with users. Stairways are not hidden in the recesses of enclosed dark stairwells, but instead are sculptural, exposed, even flaunted. They dynamically—and invitingly—rise up or down. All the while, users are engaged in observing of a panorama of activities in each of what seem like performance spaces. The expression "All the world is a stage" might apply here: all the school is a stage—a living demonstration of the art and science of medical care.

There are a series of classrooms, each with modular units and dividable spaces. Two fifty-seat spaces become a single space for one hundred. Two lecture halls that accommodate one hundred ten become one for two hundred twenty. Another pair of lecture halls which each hold two hundred twenty have raised partitions to now seat four hundred forty. Group learning rooms are outfitted with enormous touch monitors and white boards.

The first floor includes a built-out space for the medical school’s Museum of Neuroanatomy. Its display windows to the public spaces are also framed in birdseye maple. Founded in 1944, it is said to be the only museum in the United States dedicated exclusively to the brain. The collection from the "brain museum," along with its world-class collection of slides, arrives early in 2018; the intricate display highlights achievements of UB’s groundbreaking researchers.

Two ornate lanterns, which illuminated the vestibule of the UB Medical School on High Street from 1893 until 1953, now proudly hang in the new building.

One of these nineteenth century lanterns made the move to Farber Hall in 1953 (when the school moved to the University’s South Campus). The other somehow wound up in a barn in Eden, New York. When the property owners discovered the lamp’s identity, they returned it to UB.

The newly reunited lanterns were gaslights when they performed their job in the nineteenth century. Years of rust from neglect and exposure to the elements had to be ground off the surfaces. Missing and decayed sections of steel were created in exact replicas on a 3-D printer. Now painstakingly restored, the fixtures have been upgraded with LED lights that mimic the flicker of gas flames.

The restored lights anchor the history and tradition behind this forward-looking academic medical center.

Barry A. Muskat is a longtime contributor to Buffalo Spree and its architecture critic. He is a leader in the business community, an architectural historian, and a licensed real estate salesperson.

Recipe of the week: Lamb Shish-Kebobs

Keep grilling! Skewer the lamb, onions, and bell pepper on 4 or 8 w…