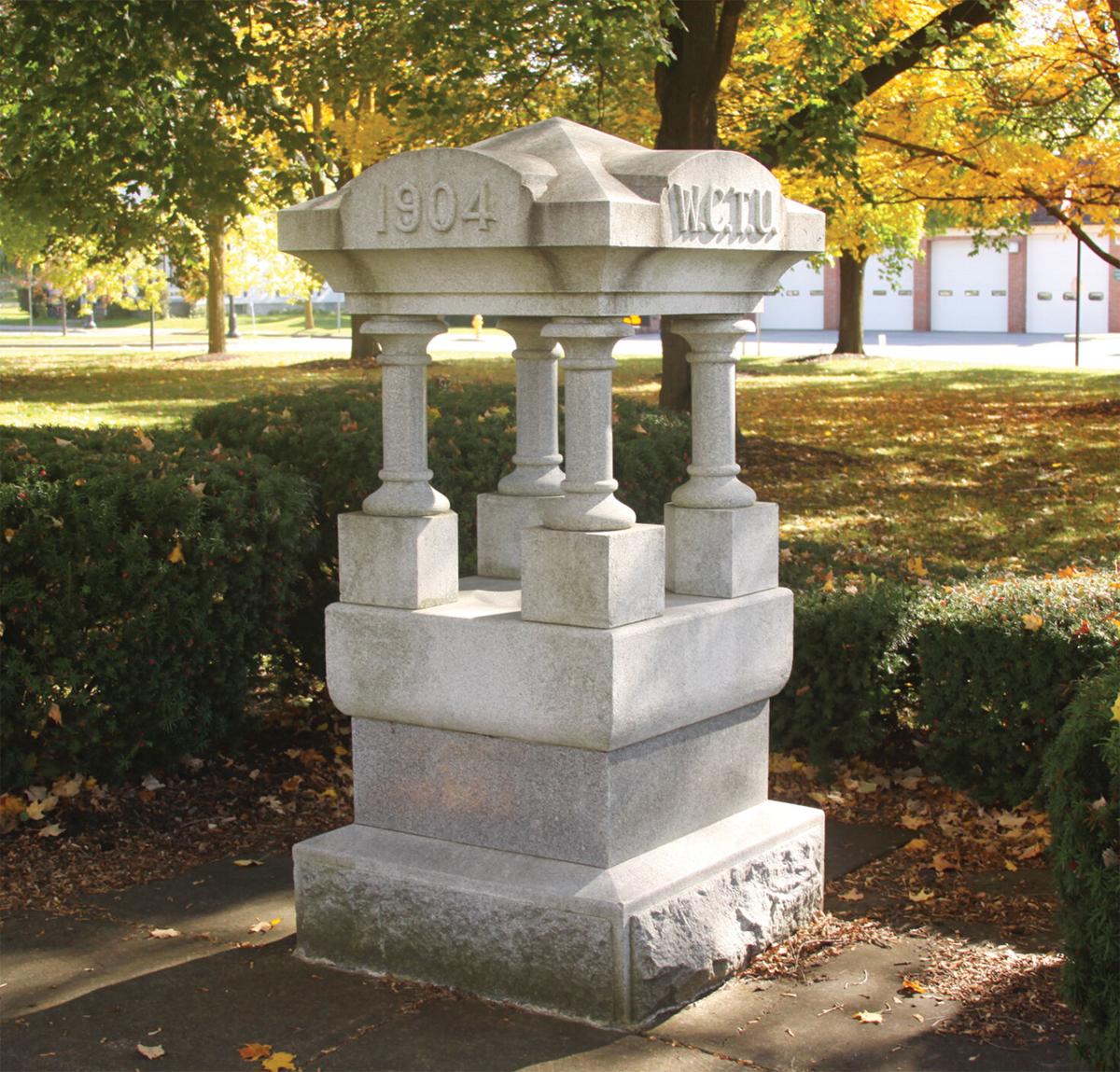 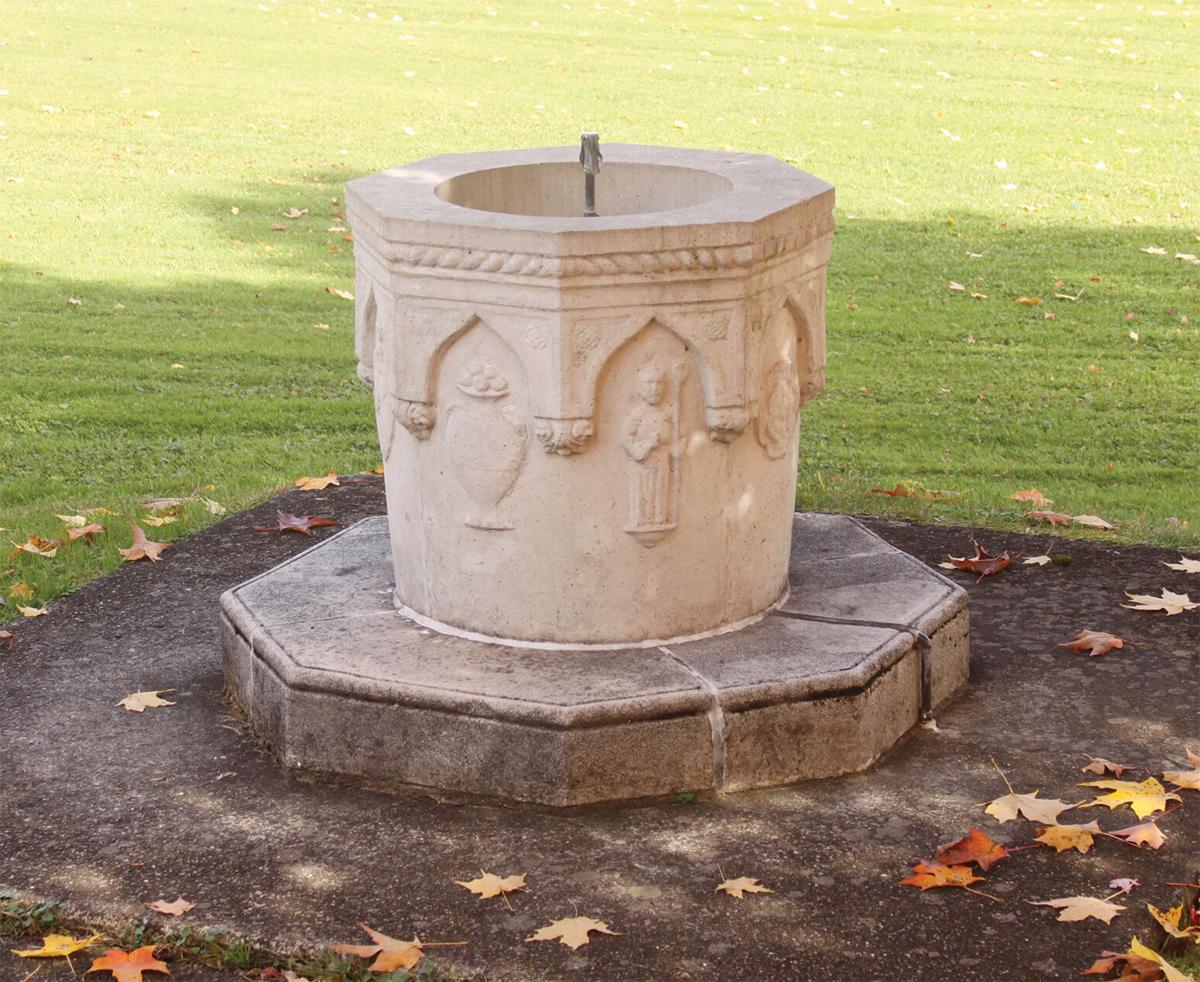 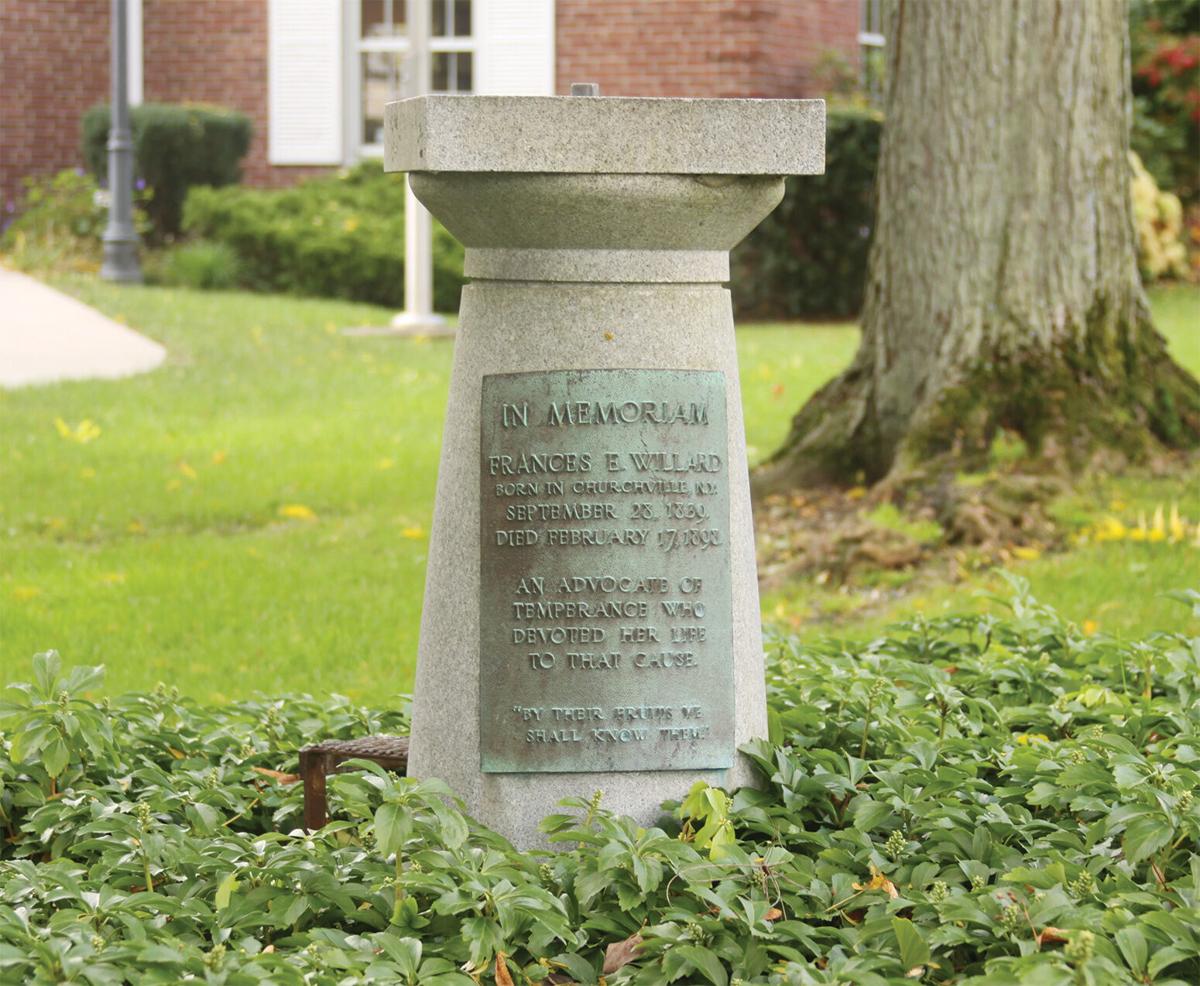 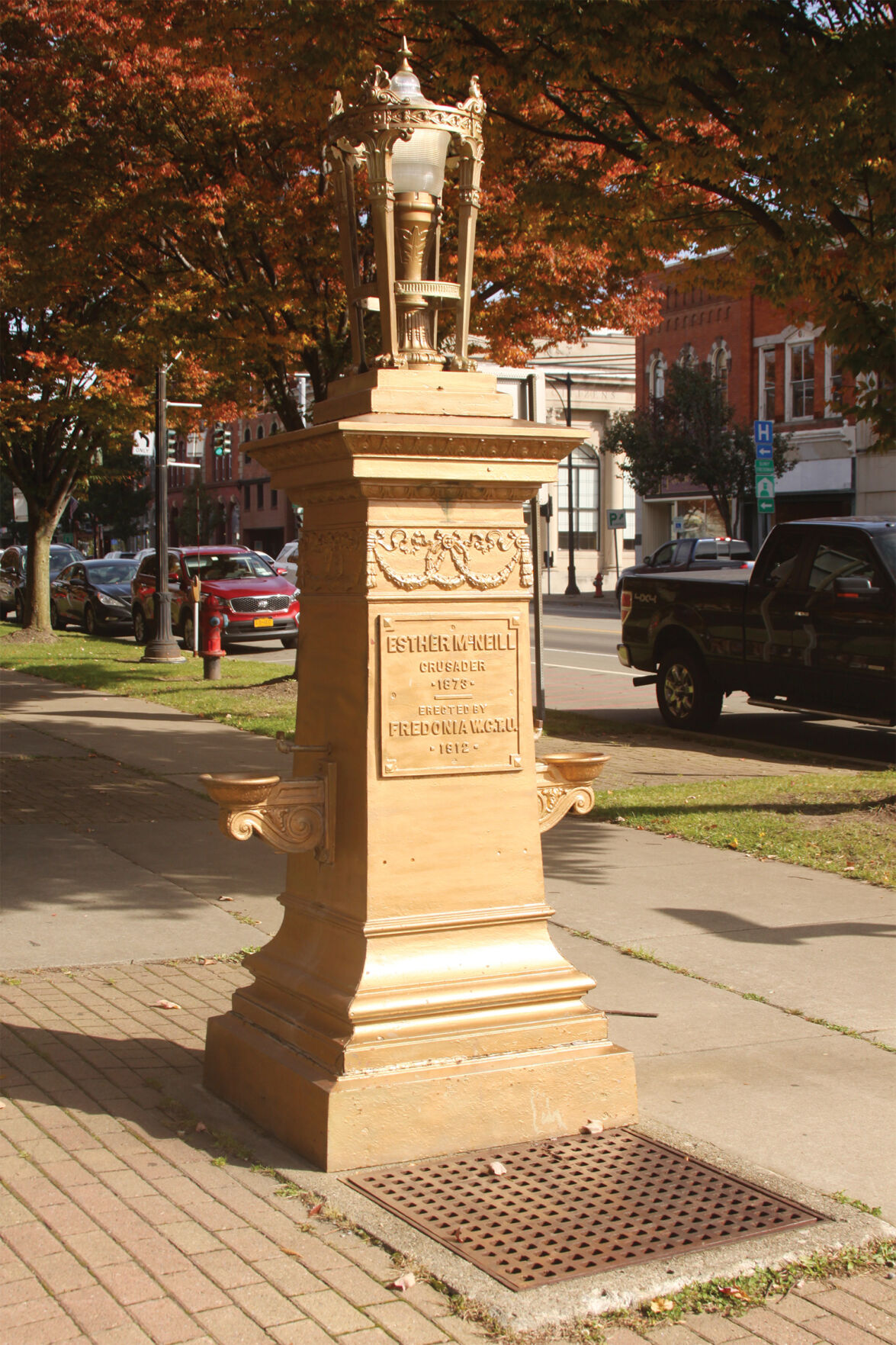 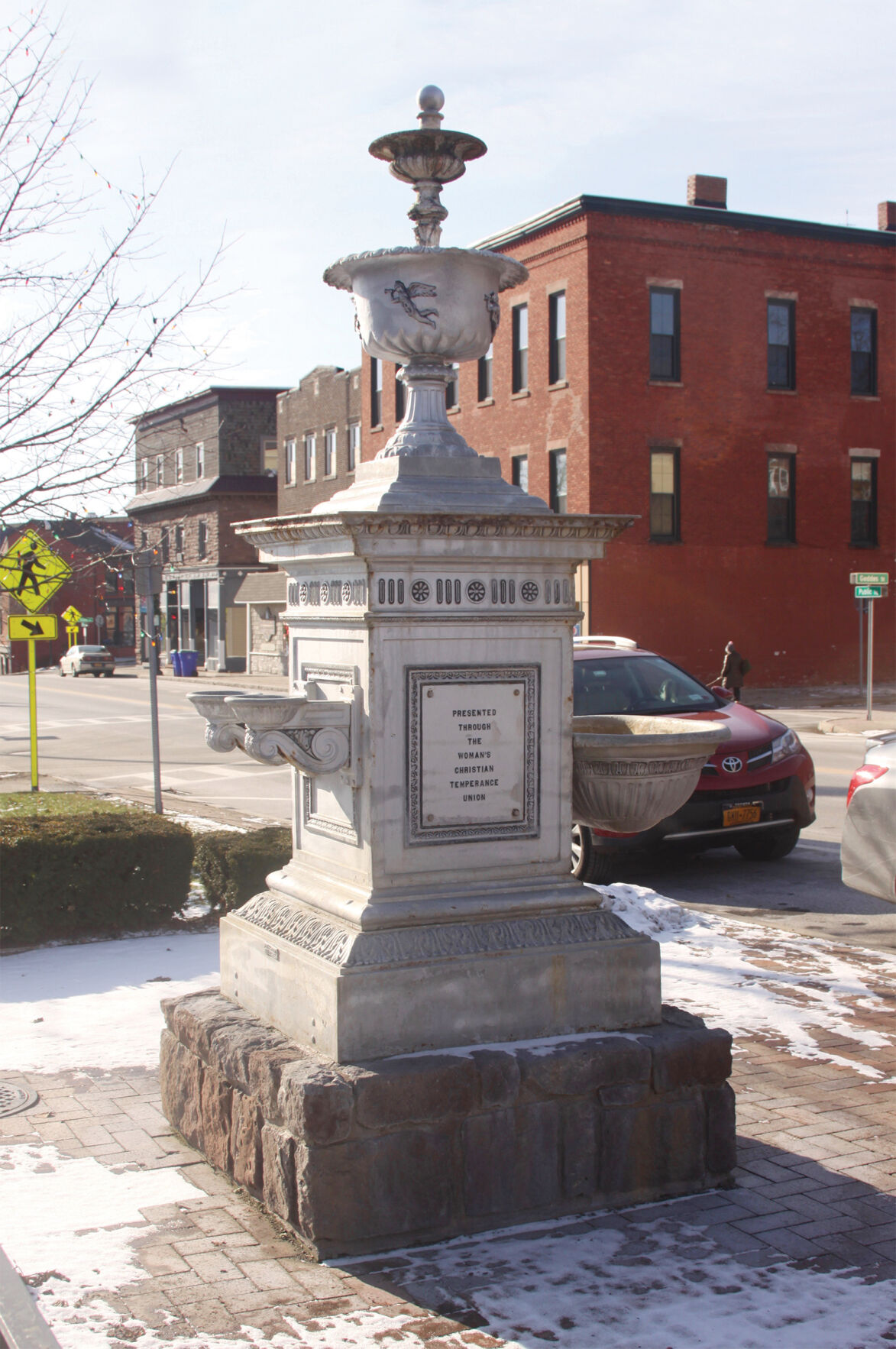 A little past noon on December 15, 1873, 100 women filed two-by-two out the front door of the Fredonia Baptist Church, on the northern edge of Barker Common, and marched across the park to Taylor House, a hotel with a saloon. Once inside, they prayed, sang hymns, and appealed to the proprietors to cease trafficking in “intoxicating liquors,” declaring them to be “the parent of every misery, prolific in all its woe, in this life and the next.” They and dozens of other women of the church repeated their plea throughout Fredonia over the next several days, politely if firmly confronting owners of establishments that sold alcohol.

These events marked the beginning of the Women’s Temperance Crusade, a movement that spread, as one contemporary put it, “like a prairie fire” across New York and the Midwest. Although the flames died down within a year—saloon owners, even sympathetic ones, chose to stay in business—the Crusade gave birth, in 1874, to the largest mass movement in US history up to that point, the Woman’s Christian Temperance Union. The WCTU, which many will be surprised to learn is still active, was among the most influential organizations of the Progressive era, championing not only temperance but women’s rights, equal pay for equal work, protection of women and children in the workplace, and much more.

In 1913, the WCTU of Fredonia marked the fortieth anniversary of the Crusade by dedicating a memorial drinking fountain to Esther “Mother” McNeill, a leader of the campaign and president of the Fredonia WCTU chapter from 1877 to 1895.The working fountain stands on the southwest corner of Barker Common, where it still offers a cool drink to passersby. A visitor looking north can see the church where the Crusade began and imagine the column of women in ankle-length dresses bearing down on bar owners who peered nervously out their windows.

Temperance fountains like the one in Fredonia were erected across the US and Canada in the decades around the turn of the nineteenth century, placed by the WCTU in hundreds of cities and towns as highly visible alternatives to visiting a saloon. That purpose is not as naive as it sounds. Because water was often foul tasting and unsafe, people frequently drank beer, hard cider, whiskey, and other distilled spirits instead, with predictable results. Alcohol abuse in the nineteenth century was a scourge not unlike the opioid crisis of the twenty-first, cutting lives short and destroying families. With good reason, Ken Burns titled the first episode of his documentary, Prohibition, “A Nation of Drunkards.”

WCTU drinking fountains are memorials to a movement, now largely forgotten, that got its start here in Western New York. In addition to the fountain in Fredonia, these structures—often more artwork than convenience—are hiding in plain sight at four other locations throughout the region.

The first organizational meeting of the WCTU took place in Chautauqua in the summer of 1874. Inspired by the Crusade, women attending the first meeting of the National Sunday School Assembly agitated for a convention—which took place the following November in Cleveland—to officially establish the WCTU. A nonworking temperance fountain sits in front of what was once the Chautauqua headquarters of the WCTU, next door to the Women’s Club, on James Street.

Most likely, drinkers scooped water from the basin with a metal cup, which, in many fountains of the era, was attached with a light chain. These “common cups” became notorious as people gained an understanding of germ theory, and laws banning them were passed throughout the US in the early twentieth century. The demise of common cups led to the arc-squirting fountains we drink from today.

The cast-iron temperance fountain in Allegany stands in a tiny plaza next to the Town Hall, on West Main Street. Installed in 1910, the fountain is of a type popular then, featuring water troughs for horses and dogs as well as people. The design is in keeping with the WCTU’s support of animal rights. The organization was among the first to speak out against cruelty to animals and campaigned against the use of feathers in women’s hats, a Gilded Age fad that decimated populations of exotic birds.

Originally, the Allegany fountain stood at the edge of Main Street with its largest trough (at the rear in the photo) facing the street to accommodate horses. In 2015, the fountain was moved a short distance away from the road, refurbished, spun 180 degrees for the convenience of human drinkers, and reconnected to water.

Circle Park in Avon, at the center of a traffic roundabout, is dominated by a massive Civil War memorial, so it’s easy to miss the WCTU fountain nearby despite its monumental design. It has been in and out of service since its dedication in 1904 and is currently shut off. The foundation has a space for ice to cool the water, which flowed through a metal coil.

A bowl is carved out of the granite atop the foundation, and surrounded by the columns to hold a pool of water. Like the fountain in Chautauqua, this one probably once included a common cup.

Churchville is the birthplace, in 1839, of Frances Willard, WCTU president for two decades until her death, in 1898. A tireless campaigner for temperance and women’s rights, and a prolific author and speaker, Willard was a famous woman in her day. (She was the first woman honored with a place in Statuary Hall in the US Capitol building.) A temperance fountain dedicated to Willard stands in front of the public library at the center of Churchville. The plaque reads, “By their fruits ye shall know them” (Matthew 7:20).

This modest structure—it could be mistaken for a bird bath—is ironic given Willard’s renown. At one time, a large granite monument stood next to the fountain but has since gone missing. Currently, an effort begun by the mayor and led by the library staff is underway to restore the fountain and connect it to a water line. A rededication had been planned before the pandemic.

Over the decades, temperance fountains like these have been lost to vandalism, road expansions, and accidents. Many of the cast-iron versions simply fell apart. One especially unfortunate loss stood in front of the Lima Presbyterian Church, about thirty minutes south of Rochester. Installed in 1900, it was eleven feet high with a life-size statue of Rebecca at the Well (a popular Old Testament figure for fountains) and a huge trough for horses. Sometime in the 1950s, a tractor trailer careened off the highway and smashed the fountain to pieces.

Chances are that other WCTU fountains are out there—moved to forgotten locations, obscured by foliage, sitting in abandoned barns—waiting to be discovered. The WCTU keeps a list of known temperance fountains on its website, wctu.org, and encourages people to contact them if they know of any that are as yet unidentified.

There may be one near you.