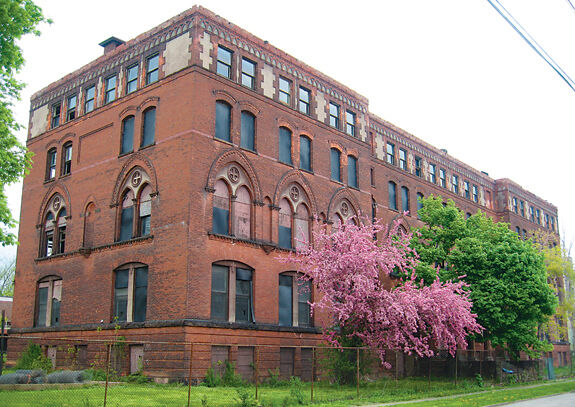 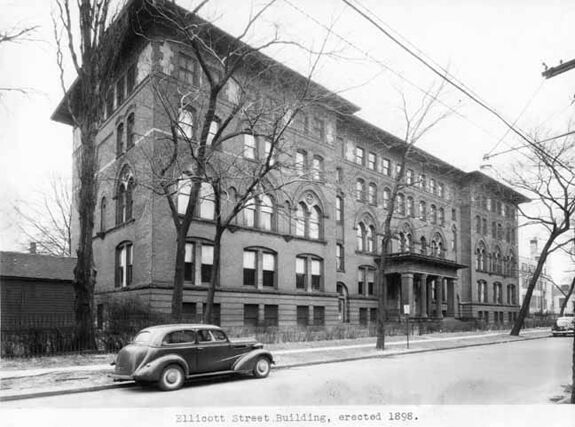 Behind the beautiful Italianate Squier Mansion on Main Street—nearly demolished in 2001 and dramatically restored in 2004—sits a less-publicized architectural treasure. This shabby but still arrestingly beautiful building once formed part of a complex that includes Squier and several other buildings on the east side of Main near Bryant. Completed in 1899, the five-story structure was built to accommodate the growing needs of St. Vincent’s Female Orphanage Asylum, which had been housed in the Squier since 1885. The new building provided additional space for dormitories, classrooms, workrooms, dining, and a chapel. After its completion, the Squier became St. Vincent’s Technical School and the 1899 building became known as St. Vincent’s Female Orphanage Asylum.

At the turn of the century and for at least forty years afterwards, St. Vincent’s Female Orphanage Asylum was a thriving institution—it did not just house orphaned girls; it educated them and provided them with technical training so that they could become self-supporting. In the nineteenth century, this was considered an innovative concept. Their dressmaking school often provided ballgowns and trousseaux for Buffalo’s wealthiest women. But as the twentieth century progressed, government assistance for dependent children increased, and the new trend of foster care emerged, so in 1948, after housing and training 10,000 young women, the orphanage closed.

The complex was occupied by Bishop O’Hern High School from 1952 until 1971 and then passed into the hands of Erie County Community College, which used it as a city campus from 1971 through 1981, at which time the college moved downtown to the recently renovated Old Post Office. In 1983, the entire complex was purchased by cardiologist Kenneth Gayles, who planned to turn it into a medical facility. At this time, having been recently vacated by ECC, all the buildings were totally occupiable. But—then—they seemed too far away from the burgeoning medical campus, so they remained empty, suffering considerable damage as a result. (During the Griffin era, plans to convert the orphanage structure into apartments never materialized; a sign on the building is all that remains.)

In 2001, auctioneer Cash Cunningham bought the entire property, which at this point consisted of the Squier, the Green & Wicks building, and a 1935 Art Deco gym. The Squier was eventually restored, but there were no plans for the Green & Wicks orphanage—though it comes close to the Squier in aesthetic value and may exceed it in reuse possibilities.

Architecturally, this building provides a diverse catalog of ornate detailing. The windows alone are a glossary of Gothic, Renaissance, and Neoclassic detailing, while the handsome Italian Renaissance porch is supported by brick and stone columns. Sadly, when part of the overhanging roof and brackets fell down a few years back, the remainder were removed.

In March, it looked like there might finally be hope that the orphanage would once again find an educational use. The building’s 55,000 square feet and its location a few blocks north of the Buffalo Niagara Medical Campus represent opportunity to the Health Sciences Charter School, now located in Tonawanda. There, over eighty percent of the students already live in Buffalo, and many have not found bus service to the school’s Kenmore location convenient, especially for after-school activities. The current school’s size is also inadequate. At 1140 Ellicott, the students would be able to better prepare themselves for health science careers by attending special programs hosted by the various entities of the Medical Campus as well as take advantage of city bus lines and a nearby subway station at Summer/Best.

According to plans announced on the school’s website as well as in local press, the work is to begin as soon as possible, so that two floors will be ready for use by the beginning of the 2011–12 school year. Ellicott Development is financing and overseeing construction, while distinguished area architects Stieglitz Snyder are repurposing the building for its new use. Paul L. Battaglia is the project’s senior architect. Ellicott would take ownership of the building; the charter school would be the tenant.

Will it really happen? Some might answer "Why not?" After all, the adjacent Squier Mansion—now fully restored—was once spoken of as doomed forever. Another nearby building, the former Packard showroom, is now home to brand-new loft apartments, and not far away is the Artspace complex. There are the makings of a vibrant urban neighborhood here. The expeditious reuse of the St. Vincent’s Orphanage is an essential ingredient. But as we went to press, current owner Cash Cunningham was careful to note, "We do not have a signed deal yet."

Editor's note: After going to press, we learned that  the deal for St. Vincent's would also include the now-vacated Squier mansion, with both structures being purchased by Ellicott Development. (Buffalo News, 4/23). Significantly, there was still no comment from the developer.

Sources: Buffalo News archives, Buffaloah.org (Buffalo as an Architectural Museum), Additional research was completed as part of an earlier Spree article, "Can These Buildings be Saved," and was largely provided through archives held by then-Preservation Coalition director Tim Tielman and City of Buffalo Inspections