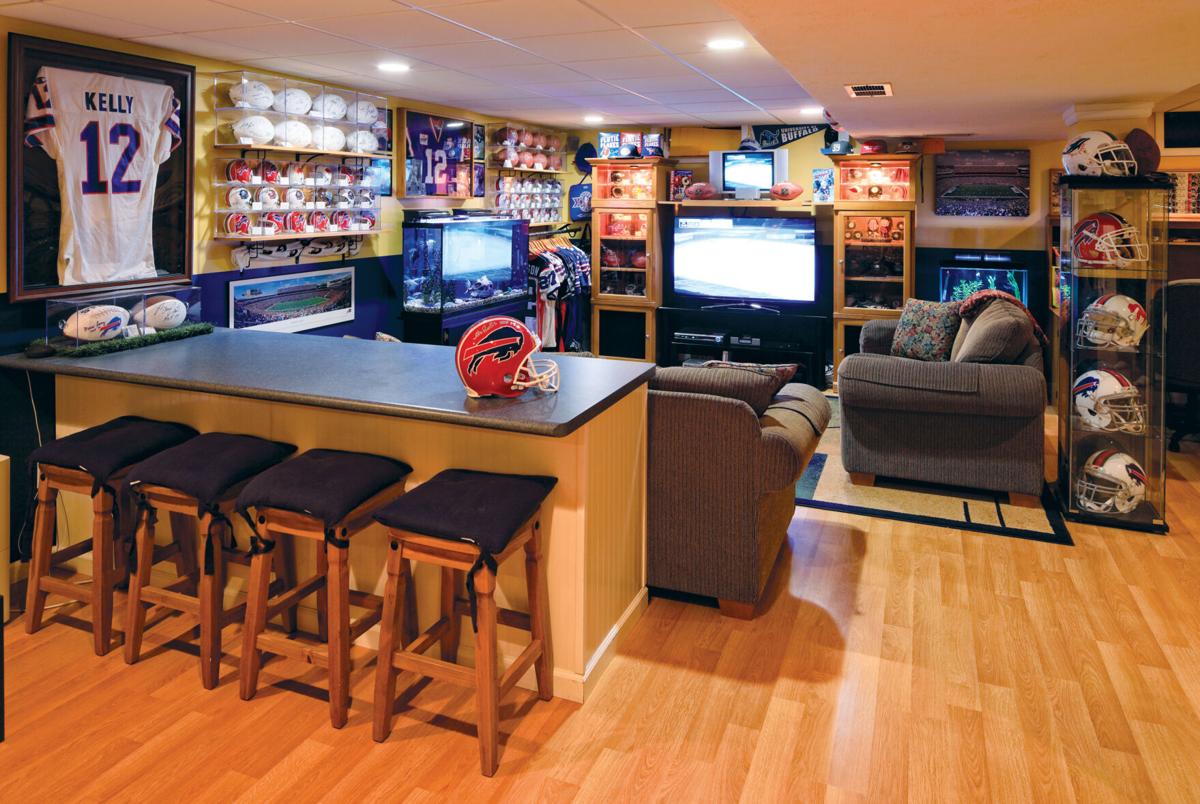 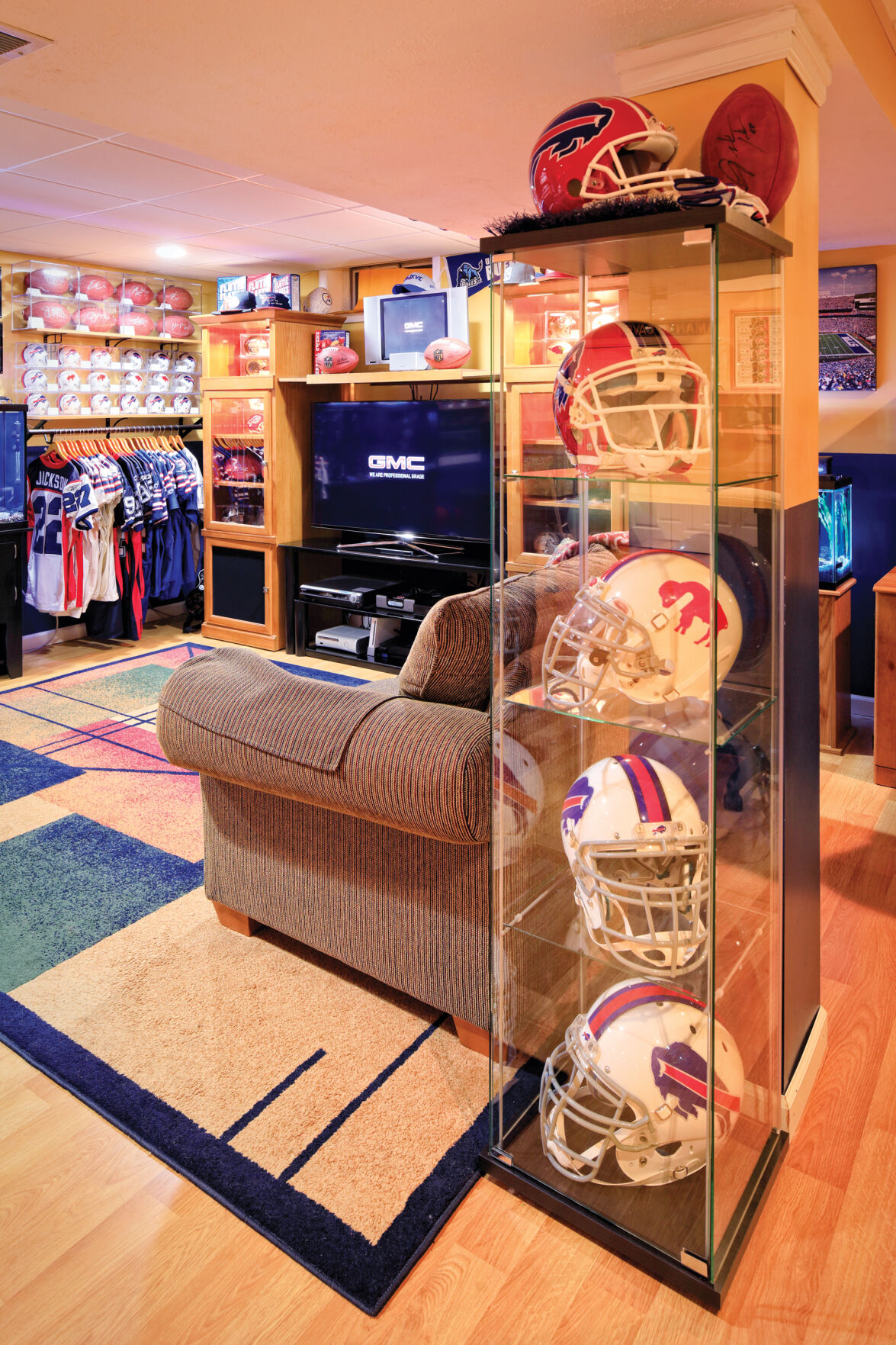 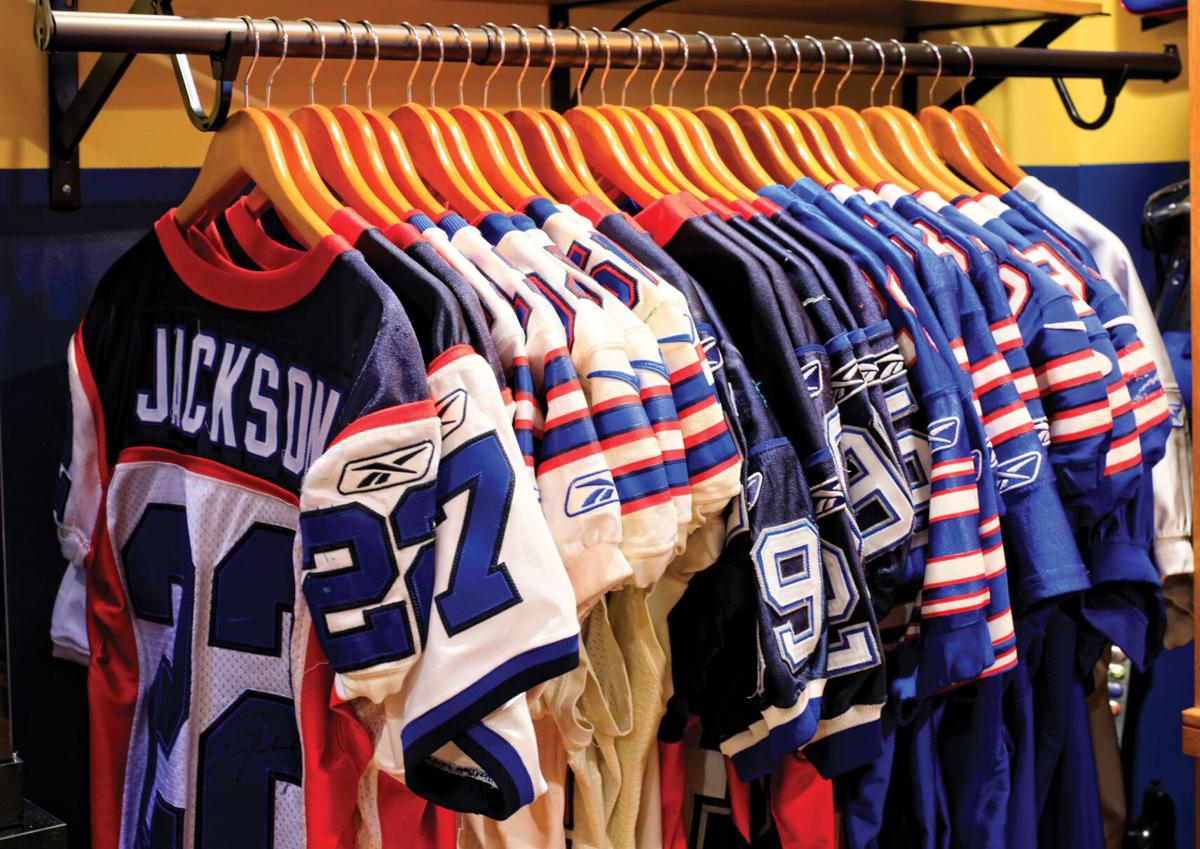 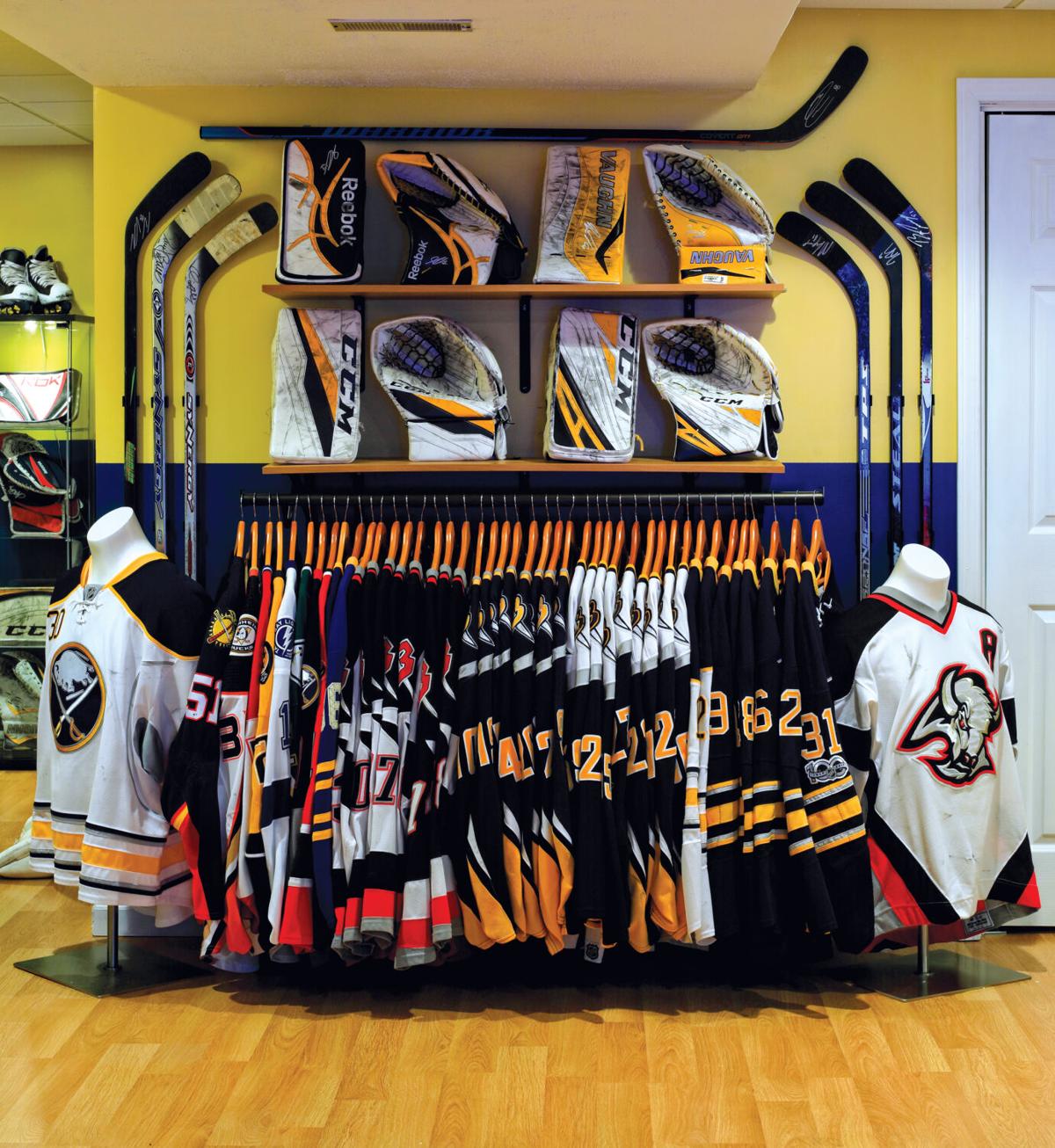 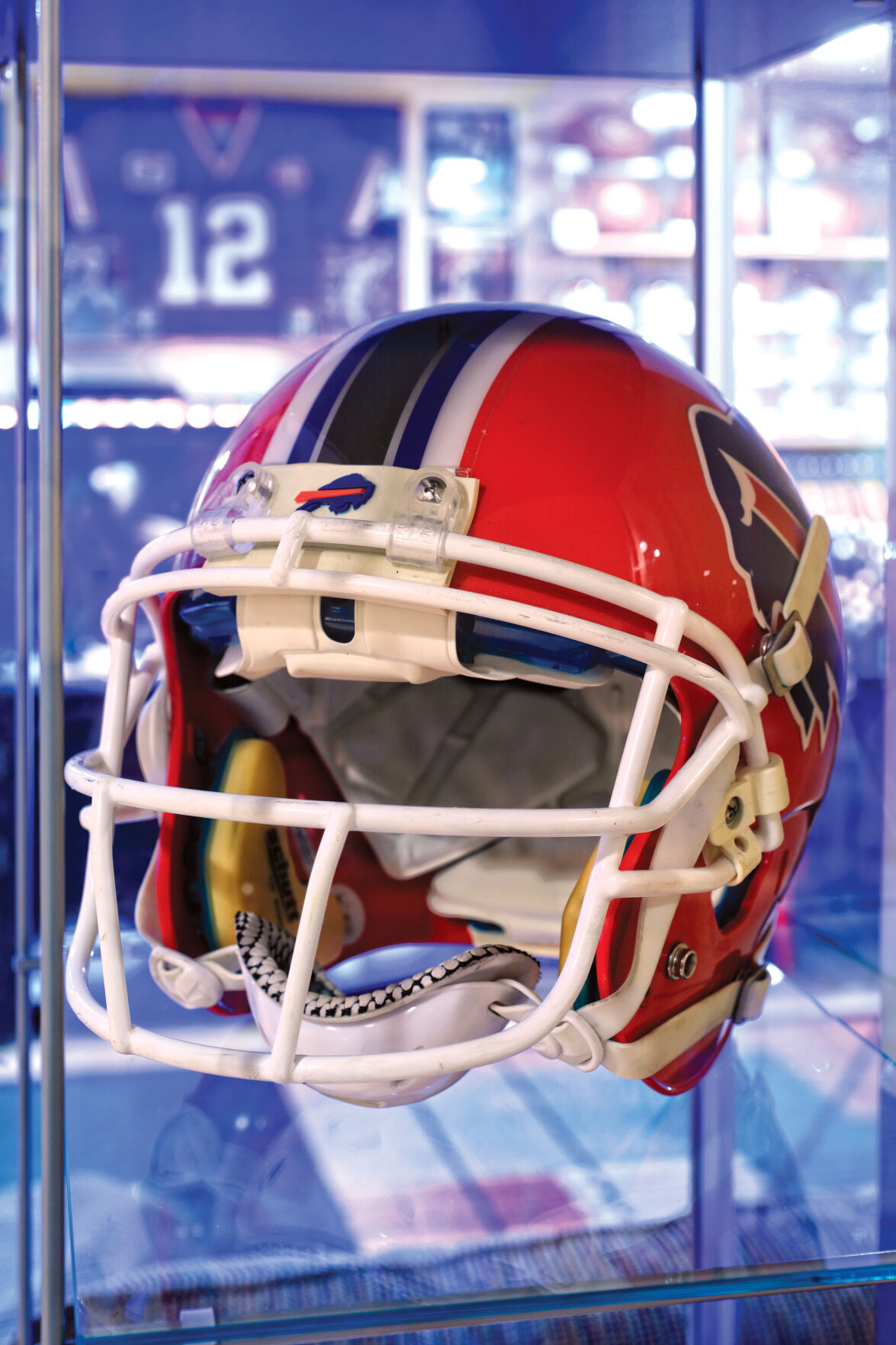 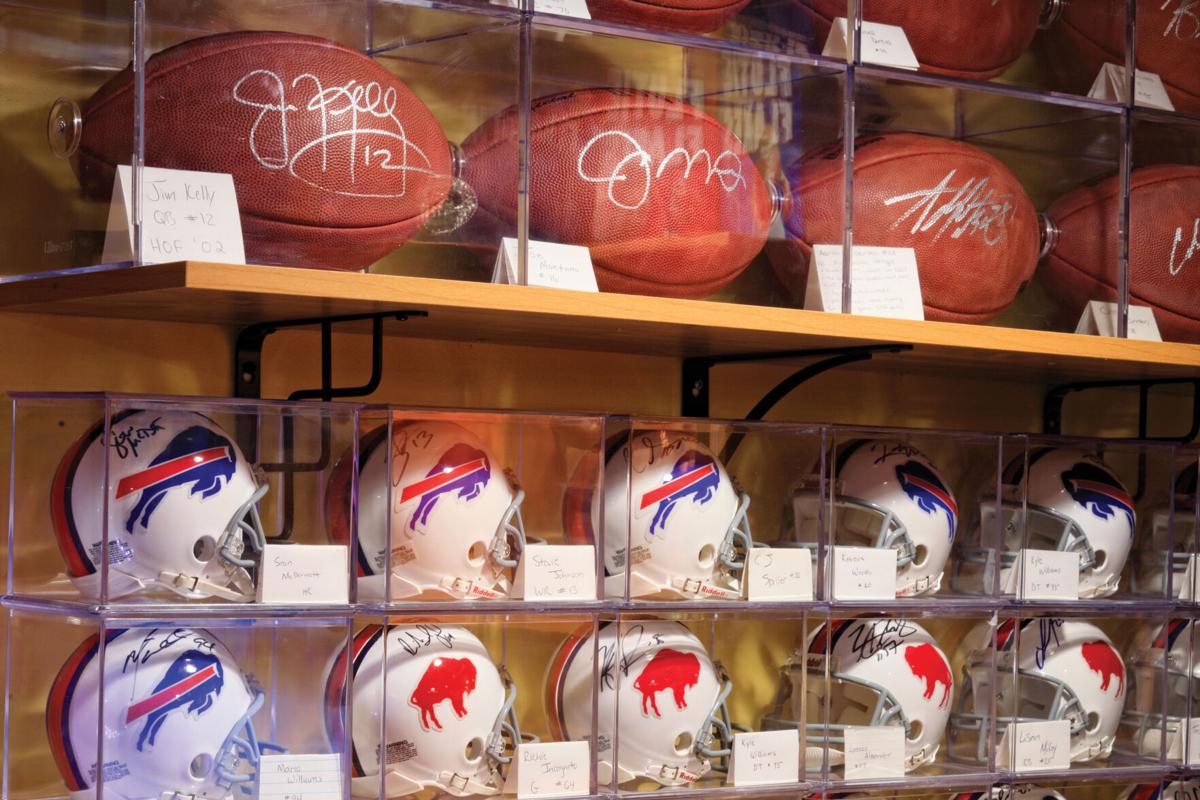 When friends enter Tyler Orlando’s 1,100-square-foot basement to watch a game, they must walk by a five-and-a-half-foot-high wooden cabinet he has positioned as the centerpiece of his massive Buffalo sports memorabilia collection. Inside, he keeps four Buffalo Bills helmets, including a special red one he takes out to let visitors examine.

“I hand them the helmet Stevie Johnson wore in 2010,” Orlando says. In 2010, Johnson enjoyed one of the greatest seasons by a Bills wide receiver ever, catching eighty-two passes and ten touchdowns. That was also the year Johnson’s unique personality started generating headlines.

After catching a touchdown in Cincinnati, Johnson pulled up his jersey and displayed a white shirt bearing the question “Why so serious?” the famous words the Joker spoke in Batman: The Dark Knight. Orlando keeps a picture of Johnson’s celebration handy to prove the helmet’s authenticity. “They’re like, ‘Oh, you’re full of it,’’ he says. “[I say], ‘No seriously, look, this mark on the helmet lines up with the mark in the photo. This is the helmet he wore.’ They’re like, ‘This is pretty cool.’”

The entire room, which Orlando has devoted to the Bills and Sabres, is pretty cool. “I’ve needed every square foot,” he says. Signed pictures, banners, pennants, paintings, and framed jerseys are plastered all over the wall. Shelves are filled with autographed helmets and footballs. Naturally, items of Bills legends Jim Kelly, Andre Reed, Bruce Smith, and Thurman Thomas hold central positions.

Orlando owns about forty-five game-used Sabres jerseys, thirty game-used Bills jerseys, and a wide array of other equipment organized throughout the room. “It’s something I’m very passionate about,” says Orlando. “I have a lot of pride in it; it’s a hobby that I love doing.”

When his family moved to their suburban Buffalo home fifteen years ago, Orlando’s father, Todd, furnished the basement for Tyler and his sister, Maddy. While it’s still technically a shared space, it’s consumed by Tyler’s items.

“Eventually, the tidal wave of collecting took over,” admits the collector, who is hardly alone in his obsession. A wave of rooms or other spaces—spare bedrooms, dens, garages, and even outdoor areas—dedicated to the Bills and Sabres have been popping up throughout Western New York over the past couple decades.

Buffalo sports fans display their passions in myriad ways, and transforming rooms into shrines for their teams has become a labor of love for many. When Brian Pilling bought his first house on the outskirts of Fredericton, New Brunswick, about ten years ago, he envisioned an old garage on the property reconditioned into what is now the “Touchdown Tavern.” “I saw it, I said, ‘That’s my spot,’” says Pilling, the president of the East Coast Bills Backers organization.

Pilling gutted the 600-square-foot structure—“tore it right down to the studs”—and rebuilt it into a red, white, and blue Bills-themed bar with memorabilia everywhere. For a decade, about twelve members of the local Bills Backers chapter assembled there to watch games.

But when the COVID-19 pandemic hit, Pilling decided to tear everything down again and overhaul the space. (“Sort of what we’re doing with the franchise the last couple years,” he notes.) The renovation gave Touchdown Tavern a brighter, more modern look, and a new name—HQ. Pilling poured his own Bills concrete slab coffee table, refurbished a billiard table to match the color scheme, and spent about thirty hours meticulously painting the ceiling to look like a football field.

“From what I had before to what I transitioned into ... I turn the lights on, and I go, ‘Geez,’” Pilling enthuses. “I smile every time I walk in there.” Pilling, who tweets @Eastcoastbills, has created a potential tourist destination. “I’ve been getting people from literally all over the world messaging, saying they’d want to come by and check out the place,” says Pilling.

In Ithaca, about a twelve-hour drive from Pilling, Dan Cafferty keeps a room he calls the “Aud Club” filled with Bills and Sabres items; it’s a nod to the popular sports bar that was inside Memorial Auditorium. Cafferty began displaying his memorabilia in a room in his apartment where he and his friends would gather. “We turned into our own weird little social club for a whole long time,” says Cafferty, who lived in Syracuse at the time. “A lot of people still hold onto those memories as much as I do.”

Cafferty never set out to collect memorabilia, but the lifelong fan “just kind of acquired things. The room  spawned into what it is now.”

Among his hundreds of items, Cafferty, who attended games at the Aud before it closed in 1996, has a seat from the famous orange section, as well as pucks from every Sabres game he has attended.

In addition to jerseys and framed photos on the walls, Cafferty seems to own every promotional banner and beer display that has a Bills or Sabres logo. He recently added a signed No. 17 Sabres goat head jersey of Bills quarterback Josh Allen and a Super Chexx bubble hockey game to the room.

As he notes, “People get a little overwhelmed by it.”